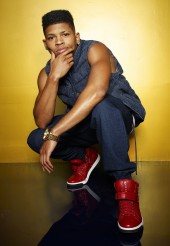 The actor talks music and brotherhood 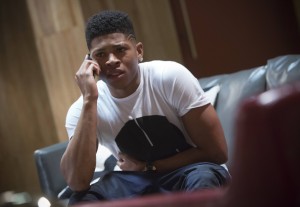 Fox’s new hit EMPIRE has its two-hour first-season finale Wednesday, March 18, but have no fear – it was renewed for a second season almost immediately after it premiered to huge ratings in January. The series, created by Lee Daniels and Danny Strong, follows the personal and musical (and financial) fortunes of the Lyon recording dynasty, headed by ailing but iron-willed Lucious (Terrence Howard), who clashes with ex-wife Cookie (Taraji P. Henson) now that she’s out from a seventeen-year prison stretch and seeking her own piece of the company.

The three Lyon sons are caught in the middle. Bryshere Y. Gray plays youngest Lyon son Hakeem, who has loads of hip-hop talent but no discipline and poor strategy skills. Gray is a real-life recording artist who has gone by the stage name Yazz; EMPIRE is his first major acting role.

AX: Is the style of music you perform on EMPIRE the same as your style as a musician?

BRYSHERE Y. GRAY: It’s my style of music, but I get the chance to collaborate my own [music] with Timbaland and it’s wonderful. I wrote the first EP music, and from there I let Timbaland record that.

AX: Your character Hakeem is – not to put to fine of a point on it – kind of a brat.

GRAY: Yeah, he is – spoiled brat, he’s musically inclined, he’s the youngest of the sons, and he’s the son that’s looking for guidance. He doesn’t have guidance, because Lucious is not there to teach him how to be a man like he should be.

AX: Why is he so hostile to his mother Cookie when she first gets out of jail? Has he just heard bad things about her, or does he have reason to be angry at her?

GRAY: What you’ve got to understand is, Lucious never let Hakeem see Cookie for seventeen years. He was too young. Jamal [the middle son played by Jussie Smollett] got the chance to sneak out after school and go see her. Hakeem was about three years old and Lucious did not want him to see Cookie, so of course, as he got older, he heard lies about her.

AX: How is it playing the brotherly dynamic?

AX: Were you familiar with Terrence Howard and Taraji P. Henson before you became involved with EMPIRE?

AX: Were any of them people that you thought, “Gee, I’d really like to work with them at some point”?

AX: Do you do live-Tweeting or social media when the episodes are airing?

GRAY: Yeah. I love to live-Tweet with the fans, because you need to interact with them, because each episode changes somebody’s life. And it means something if they can talk with the [actors]. So I make sure that I interact with the fans, When I found out that we were coming back for a second season, we were on a flight back from Chicago to L.A., and a stranger just said, “Congratulations. I want to say congratulations for getting a second season.” I’m appreciative and honored.

GRAY: That it’s the hottest new show out, that you’re going to get some great music, great drama, great acting.

This interview was conducted during Fox’s presentation day for the Television Critics Association at the Pasadena Langham-Huntington Hotel.