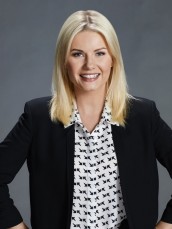 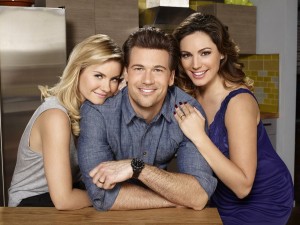 In NBC’s new half-hour comedy ONE BIG HAPPY, Tuesdays at 9:30 PM, Elisha Cuthbert plays Lizzy. In the series created by Liz Feldman, Lizzy is a lesbian who lives with her straight male best friend Luke (Nick Zano). The two have been planning to have and raise a baby together. However, at just about the same moment that Lizzy discovers she’s pregnant, Luke meets Prudence (Kelly Brook), who’s the love of his life. In order to prevent Prudence from being deported – she’s English – Luke marries her, so the household is now Lizzy, Luke, Prudence and the impending Lizzy/Luke baby.

Montreal native Cuthbert first came to international attention as Kim Bauer, daughter of the 24 hero played by Kiefer Sutherland. Since then, she’s done a number of films and was a series regular on the drama THE FORGOTTEN and the comedy HAPPY ENDINGS, which also featured ONE BIG HAPPY costar Zano.

AX: At this point, do you have a preference for comedy?

ELISHA CUTHBERT: I love it. I mean, I really love it.

AX: And is it an interesting change getting to play Lizzy, who’s a little bit more klutzy and a little bit less flirty than your HAPPY ENDINGS character?

CUTHBERT: Yeah. I enjoyed Alex, who was an enthusiastic ditz, where Lizzy is a very meticulous dork. [She’s] very clever, very smart, but a little bit goofy, you know what I mean?

AX: Is it fun to play somebody who’s smart? Besides Alex being a ditz, Kim on 24 seemed a little oblivious.

CUTHBERT: I think on 24, I was very reactive. I think everyone else on that show was proactive, but to be on an adult show as a child is very difficult.

AX: So you feel like you’re getting to grow up into your work …

CUTHBERT: It’s kind of crazy to imagine. But yeah. The [24] pilot, I was 18, and now here I am doing this. And I found comedy and discovered comedy, obviously, through HAPPY ENDINGS. But this show, I’m at the forefront of it, whereas before, it was an ensemble. So this is really exciting and I need to step up to the plate.

AX: Have you done any research into being pregnant?

CUTHBERT: I’m 32. I have a lot of women and friends in my life who are pregnant, so I’ve got a lot of different stories. So yes.

AX: Do you feel like there are certain responsibilities of being number one on the call sheet?

CUTHBERT: Yeah. Because if you’re not funny, the show doesn’t work. So I have to be successful in bringing the audience laughter.

CUTHBERT: It’s a little bit of everything. I think you rely on the audience to feel what it is that’s happening with them, but there are times when we have, like, a European audience that American jokes don’t translate [for]. So you can’t solely rely on what’s happening in the crowd. You have to rely on your cast mates to a certain extent, you have to rely on the rehearsal time.

AX: Does doing three-camera comedy with an audience for television make you think you might like to do stage?

CUTHBERT: It makes me confident that I could. I never thought about it before this. I always thought, “Oh, my medium is film and single-camera,” and I never thought in my wildest dreams that I would ever be capable of doing a multi-camera show, but I’ve really grown to love it. I’ve realized that I’m comfortable doing it, which is an amazing leap for me in my mind.

AX: You’ve said Nick Zano persuaded you to do ONE BIG HAPPY …

CUTHBERT: We had worked together on HAPPY ENDINGS. He called me while I was on vacation and I read the script. I loved it, but I said, “I can’t do a multi-camera show, I’ve never done one before. Don’t even get started.” And he called me and I was on a beach in Florida, and he was like, “Listen to me. I know you, we’ve worked together, you can do this.” And without his endorsement, I don’t know if I would have done it.

AX: But why would you think you couldn’t do it? You’d already done comedy when you’d never done comedy before …

CUTHBERT: Ask any actor tonight at this party who’s on a one-hour drama if you offered him a sitcom right now in front of an audience, if they’d do it, I guarantee they’d say no. It’s terrifying. It’s a daunting task to do what we do, but the rewards are so amazing, and the gratification of getting that instant love and appreciation and laughter is uncanny, it’s unbelievable.

CUTHBERT: Courteney Cox directed a film that I was in with Seann William Scott called JUST BEFORE I GO. That was a lot of fun and I love her, so we’ll see.

AX: And what would you most like people to know right now about ONE BIG HAPPY?

CUTHBERT: If they tune in, I hope that they relate to the characters and that they feel the journey that we’re on and what we’re going through resonates with them. [That’s] what’s most important.