Home » Digging up the Marrow review 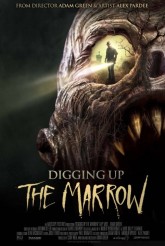 DVD/Blu-ray Review: DIGGING UP THE MARROW 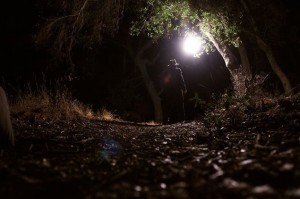 A scene from DIGGING UP THE MARROW | © 2015 Image Entertainment

Between making horror movies (the HATCHET series and FROZEN, not to be confused with the animated Disney film), horror shorts and a horror-comedy TV series (HOLLISTON) writer/director/producer Adam Green knows plenty about the horror business. His new film DIGGING UP THE MARROW has an insider’s knowledge and delight in genre conventions, which he manages to simultaneously tweak and honor.

DIGGING UP THE MARROW has a documentary format, with Green playing himself and his regular cinematographer, Will Barratt, doing the same. MARROW outs itself as fiction pretty early on, as Ray Wise turns up as William Dekker. Dekker claims that he has seen those who are “different,” the sorts of beings that many might refer to as “monsters.” Dekker believes that these people/creatures were born human, but with such extraordinary deformities that they’ve gone literally underground, where they’ve got their own cultures and metropolises. He’s even commissioned an artist to draw what he claims to have seen.

Monster-loving Adam, quoting another genre hero, really wants to believe. There are a few problems. First, even though he’s sought out a filmmaker, Dekker doesn’t want any lights in the wooded area where he says the creatures have an entrance to their subterranean world. Second, Dekker himself turns out to be lying on at least one point and his motives are murky. Third, it all seems very improbable to everyone around Adam.

Unlike plenty of other films in this approximate genre, DIGGING UP THE MARROW digs up the goods. This is especially wise, given that the humor works much better if, despite the skepticism expressed by numerous genre guest stars (Kane Hodder, Tom Holland, Mick Garris, the film’s editor Josh Ethier), it turns out that Adam is on to something. Actually, given the love of monster movies that infuses every frame, it feels as if the filmmakers would feel cheated to not pay off the notion.

There is much self-mocking fun to be had in the setup, and when they appear, the creatures, built by Greg Aronowitz, are first-rate. One can quibble a bit with the time it takes to get to the scares – yes, we’re clear that this is where we’re going, which gives us patience, and Wise is one of those actors who is almost literally endlessly watchable, but there are moments that feel a little repetitive. There’s also the question of what Dekker thinks he’s doing – the more we learn about what seem to be his actual motives, the more we wonder why he has approached a filmmaker at all. Sure, everyone wants validation, but this is an instance where it seems like there’s something else that’s desired even more.

The creatures are based on artwork and a premise by Alex Pardee, who does books with illustrations that he claims are inspired by Dekker, adding yet another level of meta to the movie.

Both the Blu-ray and DVD versions contain an audio commentary track by Green, Wise, Pardee and Barratt, extended and deleted scenes introduced by Green and a joyous, twenty-five-minute “making of” featurette that is an homage to the thrills of inventive, low-budget movie making.