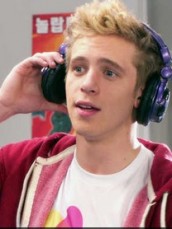 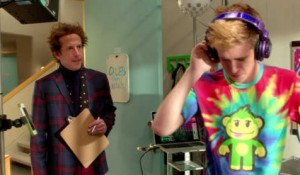 Nickelodeon’s new series MAKE IT POP begins Monday, April 6, at 7 PM and runs every week night at that time for four weeks. In the half-hour musical comedy show, three new roommates (Megan Lee, Erika Tam, Louriza Tronco) at a prep boarding school form their own pop band. Dale Whibley plays Caleb, the classmate who writes and performs the music for the group.

Whibley, who appeared in DEGRASSI: THE NEXT GENERATION, has been acting professionally in his native Canada since childhood (one early gig was a Care Bears commercial). Sitting down for an interview at Paramount Studios in Hollywood, Whibley notes with a laugh that, while the exterior of the fictional Mackendrick Prep is green and sunny, MAKE IT POP was actually shot in Canada in the dead of winter.

AX: How would you describe your character Caleb?

AX: Did you always want to be a performer, or did you ever want to do anything else?

DALE WHIBLEY: My acting career started out very young, I was about four or five years old, so performing has been a life thing. I was such an energetic kid, I was crazy, people always thought I had way too much energy. I always got myself into trouble, much like Caleb. So I think performing was the right direction for me, and the most sensible direction that I would go in for a career. I hadn’t really thought of doing anything [else] – I don’t want to sit at a desk, I want to express myself and perform.

AX: You started as an actor. When did the singing and dancing come in?

WHIBLEY: I haven’t been much of a singer and I’m still not much of a singer. I’m featured on some of the songs [in MAKE IT POP]. If you listen to some of the songs, you’ll catch a bit of me, you’ll catch a bit of the other cast, but dancing has been a free-flowing thing my whole life. I did jazz, I did hip-hop when I was fairly young, so it’s been freelance, just dancing to your favorite music, and now that I’m bringing it into the show, it’s choreographed and it’s an actual thing, it’s fun.

Our choreographer on the show, Addy Chan, she’s brilliant, she’s very easy to work with, she’s very personable, she got to know us on personal levels where it made it easier to understand her and work with her. It was fun.

AX: Do you learn dance moves that you would never have done otherwise working with a choreographer?

WHIBLEY: [Caleb is] the deejay and behind the booth. The girls are mostly the ones that are having the defined choreography, where it’s definitely, they have to do this, this and this. For me, for choreography with Addy, it’s more like, “Make sure you get this kind of [movement], make sure you’re feeding to the crowd, make sure you’re doing this.” So I have most of the control, but she gives me feels, she points me in the right direction when I’m confused or when I’m needing help on certain things. So it’s nice. I like having a choreographer, because sometimes when I’m stuck and I don’t know what to do, she guides me in the right direction.

AX: Did you do school musicals, or was all of your performing outside of school?

WHIBLEY: Most of my performing has been outside of school. I wanted to get into doing theatre and doing the stage stuff, but I never had the confidence to get up onstage and think, “Okay, I have one shot to do this. There are between fifty and a couple hundred people watching me.” It definitely got me nervous. I actually remember doing a monologue on stage at my school, and thinking that all my friends are watching, having a spotlight on me – it was nerve-wracking. So I never really got into the whole theatre thing. I mostly stayed in front of a camera, which was my comfort zone.

AX: How is it being the only male lead in a show with a lot of actresses?

WHIBLEY: The girls are phenomenal to work with. I say this a lot in interviews – sometimes I love having the guys that are a part of the show, like John Allan and Matt Baram, on set, because I get my guy time, I get to be among guys. Because being with the three girls is great, but they have their own thing, they do their own thing, they have their girl time. So sometimes having my guy time is great.

WHIBLEY: As of now, no, I’m driving my mother’s car. My ideal car is probably a vintage Mustang. I love Mustangs – they’re loud, they’re manly.

AX: Caleb writes music in MAKE IT POP. Who are the musicians you like in real life?

AX: Do you write your own music?

WHIBLEY: No. I’m a very EDM [electronic dance music] and Deep House-based artist. I like having that kind of feel, so when I’m in the studio, working with Andrew Dawson, my mentor, he’s a deejay, he’s brilliant, when we’re in the studio and we’re working, it’s mostly a feeling of music. Caleb writes the two hundred songs, he writes all the music for the girls, he gets all that kind of stuff, but I’m not a music writer. I’m actually a film writer. I like writing scripts. I love to write. I’ve written a short film recently.

AX: Is the short somewhere people can see it?

AX: What is your short called?

WHIBLEY: It’s untitled as of now. That’s one thing that I’ve been really working on. I’ve had the script done for about a year now and just the title isn’t coming to me. I think it’s one of the most important things when it comes to a script, is figuring out the title, because that’s what’s going to draw the audience in, draw what they’re going to see.

AX: Are you learning anything on MAKE IT POP that’s going to help with your writing and directing?

WHIBLEY: Absolutely. I’ve actually given my script to some of our writers and they’ve given me their feedback, and it’s definitely helped, because I can see where their points of view are coming from and it’s moving my mind in the directions that I’m wanting it to go, which is cool. It’s extra branches that I’m adding to my tree of knowledge.

AX: Are some of the people on the MAKE IT POP crew going to help you on your short?

WHIBLEY: Yeah. One of our behind the scenes directors, Sam, is going to be helping me, he’s got a couple of friends who have equipment and we’re going to hopefully get in touch with some university students to come be cast. We’re still in early phases of pre-production, so we’ll see how things go.

AX: Because you want to be a writer/director, are you acting in order to make contacts in the business, or is this fun for you?

WHIBLEY: Well, acting is obviously fun, or else I wouldn’t be doing it. That’s the lucky thing about this industry, is that we’re doing something that we love – hopefully, everybody in this industry loves – and we’re fortunate enough that we’re getting paid to do what we love. So acting is definitely my first priority at the moment, but getting these contacts in the industry is amazing, it’s definitely going to help me further on in the future, it’s helped me get my crew that I’m going to be doing my short film with, it’s doors that are being opened that were never opened before.

AX: And what would you most like people to know about MAKE IT POP right now?