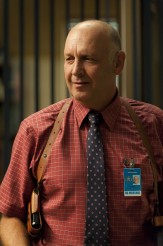 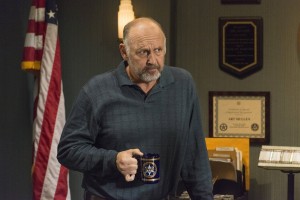 As JUSTIFIED, now in its sixth and final season on FX, Tuesdays at 10 PM, closes in on its series finale, things have really gone all to hell in Harlan County, Kentucky. U.S. Deputy Marshal Raylan Givens (Timothy Olyphant) stood by astonished while his confidential informant Ava Crowder (Joelle Carter) shot her fiancé Boyd (Walton Goggins) and drove off with ten million dollars that Boyd had extorted out of big-time weed dealer Avery Markham (Sam Elliott). Now Boyd has escaped from the hospital, Ava’s on the run and Raylan is in even more trouble than usual.

Meanwhile, Raylan’s erstwhile boss Art Mullen, played by Nick Searcy, who’s supposed to be home recovering from a heart attack, has had to come back into the office, partly because his replacement, Rachel Brooks (Erica Tazel), is also in big trouble and partly because Art just can’t bear to stay away from the action.

At a party thrown by Fox and FX for the Television Critics Association, Searcy talks about saying goodbye to JUSTIFIED, mixing a lot of jokes with his answers.

AX: You having a good time at this party?

NICK SEARCY: I am. It’s great doing the farewell tour, because you can just say anything you want and it doesn’t matter. It’s like, what are they going to do, fire me? It’s over [laughs]. Plus, I’m like old now, so it’s like I don’t really have to worry about my next job. If I don’t get one, it’ll be all right – I’ll be fine. Well, I feel bad for all the people out there in the world that don’t get to see me – that’ll be bad. I’ll feel sad for them. But for me, I’ll be fine.

SEARCY: I know a lot of people will. But I’ll get another job someday. Don’t worry, it’ll be fine [laughs]. I’m hoping for the spin-off, though. The spin-off that I’ve been pitching to them is, ART MULLEN: WAL-MART GREETER, which I think is a hell of a show. There’s a lot of stuff that goes on at Wal-Mart that people don’t know about. Art weaponizes all the greeters at Wal-Mart, because there’s a catastrophe in the parking lot or something.

AX: How is going with making this season?

SEARCY: It’s going great. I’m having a great time. It’s the last year, and that’s kind of sad, but it’s kind of fun, too.

AX: Had you ever worked with this season’s main guest star Sam Elliott before?

SEARCY: I had not, and it was so great to finally get to meet him and work with him. He was saying, “Nick, I can’t believe we never worked together.” He’s a really gracious, wonderful guy and I said, “Mr. Elliott, it’s nice to meet you,” and he said, “Nick, I sure have enjoyed a lot of your work over the years,” and I said [laughs], “Oh, come on, come on, you’re Sam Elliott!”

AX: Do you have a favorite episode or scene from JUSTIFIED?

SEARCY: Yeah. My all-time favorite scene is chasing the old man at the airport, “Blaze of Glory.” I think that was Season 2. That’s the one everybody remembers.

AX: What else have you been doing?

SEARCY: I did a couple episodes of HOT IN CLEVELAND, which is fun. In my heart of hearts, what I’d like to do after this is do a half-hour, do a sitcom. We’ll see how that goes.

AX: With emphasis on the sitting?

SEARCY: [laughs] With a lot of sitting, yeah. I always look for that. I’m constantly writing the writers of JUSTIFIED, saying, “Can’t Art be sitting down in this scene?” This season’s been great – I’m laying down, I’ve got a cane. It’s perfect.

AX: How do you feel about it coming to an end?

SEARCY: I will miss the check. And I’ll miss a lot of the people. But I’m not really all that sad about it coming to an end. You know, six years of anything is an awful lot. I’ve had twenty-eight years of marriage, and that’s a hell of a lot [laughs]. I’m not so sad about it coming to an end. I’m looking forward to the next thing, this has been a great run, and it’s a great bunch of people and a great show, but everything comes to an end.

SEARCY: Graham and I will still be friends after this, but basically, he’s off the hook. I’ve known him since 1995 and I’ve badgered him for like fifteen years, going, “I thought you liked me. I thought we were friends.” And so he gave me JUSTIFIED and I think he’s off the hook now. I’ll probably never hear from him again [laughs].

SEARCY: This season’s about one last thing. Everybody’s got one last thing they need to accomplish before they can move on with their lives. I’ll miss JUSTIFIED, it’s been great.