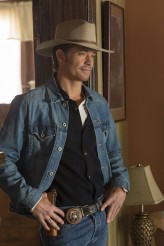 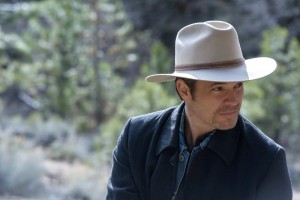 Back in 2010, JUSTIFIED premiered on FX. The series, about U.S. Deputy Marshal Raylan Givens, played by Timothy Olyphant, was developed for television by writer/executive producer Graham Yost from Elmore Leonard’s novella FIRE IN THE HOLE.

A lot of awards (including acting Emmys for Margo Martindale and Jeremy Davies), backwoods crime and bullets later, JUSTIFIED is wrapping things up in its sixth season, Tuesdays at 10 PM. Raylan has been trying to catch onetime boyhood friend and current Harlan County crime boss Boyd Crowder, played by Walton Goggins, in a sting operation, but Boyd’s fiancée/Raylan’s informant Ava (Joelle Carter) had a big surprise for both men at the end of last week’s episode. Boyd was shot by Raylan in JUSTIFIED’s very first episode and was originally scheduled to die then; given how integral the character has become to the show, it’s hard not to wonder what would have happen had that plot development occurred.

Creator Yost talks about this and other aspects of wrapping up six seasons of Harlan County mayhem.

AX: Did it ever seem ironic to you that Boyd, the character that you were going to kill off in Episode One, wound up being what you felt the whole series wrapped around?

AX: So much of JUSTIFIED, and certainly the final two seasons, have been about the conflict between Raylan and Boyd, do you have any idea of what the show would have been about if Boyd had died at the start?

YOST: You know what? That’s just not the way it went. There’s a great moment in [Elmore Leonard’s novel] RIDING THE RAP where Raylan is asked by his girlfriend Joyce about Tommy Parks, “Well, what if he hadn’t had a gun? What if he hadn’t pulled?” And he said, “But he did.” [A version of this scene with Raylan’s ex-wife Winona, played by Natalie Zea, is in JUSTIFIED’s opening episode, “Fire in the Hole.”] And I think we feel that same way about the show. That sort of counter-factual history is impossible to imagine.

AX: It looks like at least the story of Raylan versus Boyd is coming to an end. Did you have any second thoughts at any point about ending it now, about showing Raylan go on past Boyd?

YOST: Well, in terms of this chapter of Raylan’s life, the Boyd story needed to run its course, and that was about as long as the course would go.

YOST: The five seasons? Favorite episodes? There’s a bunch. One would be, and it’s a little self-aggrandizing, but I loved “Decoy,” which was toward the end of Season 4, when they’re trying to get Shelby out of town, Drew Thompson [played by Jim Beaver].

That’s one of my favorites. There are a bunch of them. I feel blessed. [In the current season], Chris Provenzano is one of the writers, so he wrote that scene [where Raylan reminds Ava that she is great at bluffing] and the way it touches on the past and Bowman and her whole history. The scene between Markham [Sam Elliott] and Ava and then Markham and Boyd in [Episode] Three, that’s one of my favorites, and the scene between Raylan and Boyd in [Episode] Two.

AX: You’ve talked about writing in Elmore Leonard’s voice for JUSTIFIED. For the next thing you do, do you want to write in your own voice, or do you feel like your voices are in some way a reflection of other voices?

YOST: You know, hopefully I’m just writing in the voice that’s appropriate to the project, whatever that is. So PACIFIC was specific. BOOMTOWN had its own voice. It’s all kind of different.

YOST: That’s yet to be figured out. Really, the focus is right now on this. Noah Wyle and I [both executive producers on FALLING SKIES, which Wyle stars in] pitched and sold, at least to be developed, a limited series to FX about the run-up to World War II and the great debate in America about whether or not to get in the war. That would be a limited series. It was not an easy call. Lindbergh, Roosevelt and Edward R. Murrow. Those are the three main characters.

YOST: That we were as true to Elmore Leonard as possible.

This interview was conducted at FX Network’s portion of the Television Critics Association press tour at Pasadena’s Langham-Huntington Hotel.