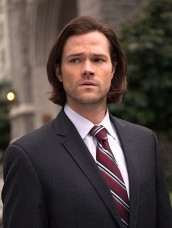 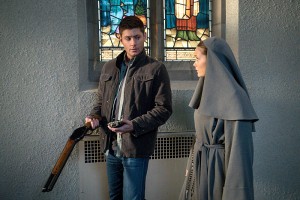 There are two separate plotlines in SUPERNATURAL’s “Paint It Black” (not to be confused with the Season 10 opener, titled simply “Black”). In one, Dean (Jensen Ackles) and Sam (Jared Padalecki) investigate a case of possession at a Catholic church/abbey. In the other, Crowley (Mark A. Sheppard) finally indulges his mother Rowena’s (Ruth Connell) desire to get her hands on the Grand Coven leader Olivette (Teryl Rothery).

The Winchester part of the episode is fairly procedural, though the Mark of Cain plot thread provides a reason for Dean to unburden himself about his fears and desires to a priest. The confession starts out as a fakeout to lure the resident homicidal ghost, but it becomes heartfelt as Dean keeps talking. It’s not exactly new territory, but Ackles makes the most of it.

Sam and Dean are drawn to the church in the first place as it suddenly has a spike in murders and suicides among the parishioners. The dead men were all unfaithful to their wives. It turns out that Isabella (Catherine Michaud), one of the nuns affiliated with this church is actually a ghost who killed the artist who painted her back in 1520 Italy. They were so obsessed with each other that she let him mix not only her blood but bits of flesh and bone from her hand into his paint. However, when Isabella discovered that the artist rejected her in favor of another, she stabbed him to death, was burned at the stake and now strikes out at any man who, during confession, mentions infidelity.

Sam discovers this by reading the young woman’s journal and realizes the way to stop the vengeful spirit is by destroying the painting containing the blood, etc., just in time to save Dean from being stabbed by another nun (Rachel Keller) who is possessed by the ghost. Sam then gives Dean a pep talk about getting rid of the Mark – again, we’ve heard variations on this before, but as Winchester bonding moments go, it’s decent.

Giving Crowley someone who could pull his primal strings seemed like a good idea, but Rowena just isn’t working. Maybe it’s that the character was simply misconceived from the start, maybe it’s that Connell has been directed to play Rowena too broadly, maybe it’s the show’s frequent problem with integrating recurring women, but whatever the reason, this is a poor fit. Sure, SUPERNATURAL has its successful moments of camp and self-parody, but they’re never this broad and disconnected from the show’s pulse.

Otherwise, “Paint It Black” is fundamental SUPERNATURAL – the Winchesters finding ways to get personal about fighting things that go bump in the night, or the day, or the church …