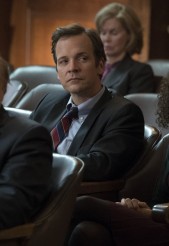 The actor talks why he likes to play morally complex characters 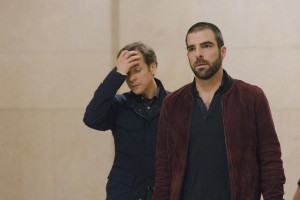 In NBC’s series THE SLAP, which has its finale Thursday at 10 PM, Peter Sarsgaard plays Hector, a married man whose extended Greek-American family comes to his home to celebrate his birthday. At the party, the young son of Hector’s wife’s best friend (Melissa George) recklessly swings around a baseball bat in a manner that suggests he might inadvertently hit other children. Hector’s cousin Harry (Zachary Quinto) slaps the little boy, touching off a massive social nightmare.

Sarsgaard, who has an extensive stage career, was nominated for a Golden Globe for his portrayal of real-life journalist Charles Lane in SHATTERED GLASS. Other major film credits include BOYS DON’T CRY, KINSEY, JARHEAD, AN EDUCATION and BLUE JASMINE. He also played death row inmate Ray Seward on Season 3 of THE KILLING.

Most of Sarsgaard’s characters tend to be morally and emotionally complex, which he says is what he looks for in a role.

AX: In the opening episode, when the title slap occurs, it’s your character Hector’s birthday party?

AX: So we see some of it from your point of view?

SARSGAARD: That first episode is my point of view.

AX: Is his point of view that his cousin Harry, the slapper, is an embarrassment? Does Hector have a particular position on this?

SARSGAARD: Well, his biggest position is that he’s got a problem. I don’t think my character has got the frame of mind to take a position on it. He’s trying to resolve a conflict. The conflict is the immediate bigger problem to him. If everyone were to behave in the most reasonable way, what everyone would do is go to that kid and make sure that kid was okay. That’s what they would do. But instead, people take positions on either side of it. I do go to the kid, but then immediately what I’m trying to do is resolve a huge conflict between my wife’s best friend and my family, which could erupt into something massive, so I try to get my cousin to apologize. I try to do all kinds of things – because I work in politics, I know how to resolve conflicts. And that’s pretty much what I’m trying to do.

AX: A lot of characters you play aren’t necessarily ambivalent about what they want, but they’re what a viewer might consider as morally ambiguous. Are those the sorts of characters that you seek out, or is that where the work is?

SARSGAARD: I think everyone’s morally ambiguous in their heart. The reason we have morals, which translate into laws, is just to try to keep some lid on the whole proceedings, because we’re human and fallible and we all do things we shouldn’t do all the time. So I guess what I’m interested in playing are real people. In movies, we’ve all gotten used to seeing people that have capped teeth and don’t lie to their wives. And that just totally doesn’t interest me, at all.

AX: What drew you to THE SLAP? Did you have any hesitations because there had already been an Australian miniseries made from Christos Tsiolkas’ novel THE SLAP?

SARSGAARD: Well, it was being set in a different country, and I think the fact that specifically Brooklyn at this moment is a melting pot of different ideas about what is right and wrong in terms of family, social ideas, you have Hasids and Poles and Ukrainians and all of these people living on top of one another, and a new gentrified population coming in, you’re going to have some culture clash. I think that’s why it really works for Brooklyn at this moment. Having lived there for twenty years, in the past ten years, since I’ve lived there, we’ve had more problems like this. In Australia, it was more specifically about Australian culture, and I didn’t see it, but that’s what I’ve been told that was like. So I never even bothered watching it. I read the book.

AX: Did you do any research into Greek-American culture?

SARSGAARD: Yeah, absolutely. That’s primarily what I did. I went to church, I hung out with my friend George Morfogen – I know a whole community of Greek people in Brooklyn that I hung out with. It’s interesting – this is the way it’s mixed in Brooklyn these days. My best friend married a Ukrainian woman. I now go to all kinds of strictly Ukrainian events. There’s a whole other world I know that’s slightly less close to me through another friend that has a best friend who’s Greek and they hang out together all the time. I just started hanging out with them. It’s not rocket science. The thing about Greek culture, just knowing some of the more superficial things, is you don’t see the same kind of hugging and kissing as you might in Italy. It’s just little cultural things like that that are good to know. In terms of doing the Greek [language] in it, it’s funny – I had studied Homeric Greek in high school, that was for four years. And the thought it had anything to do with modern Greek is just ridiculous [laughs]. It was like learning completely from the ground up.

SARSGAARD: I’m doing HAMLET in New York [now at the Classic Stage Company, through May 10]. I’ve heard good things about HAMLET. HAMLET’s a good play [laughs]. I’m doing it with my longtime mentor Penny Allen, with Austin Pendleton directing. I’m doing a movie after that, directed by Russ Harbaugh, it’s his first movie and it’s myself and Debra Winger, LOVE AFTER LOVE.

SARSGAARD: I think the main thing I would say about it is – it’s called THE SLAP, so everybody goes, “How could you make a show about a slap?” It’s kind of a butterfly effect. It’s the tipping point and it’s just the earthquake that happens after that. I think it’s not only dramatically fulfilling and interesting, but it says something about true nature, which I was talking about before, that each one of us has a secret, each one of us has a lie that is hidden within us, and this event brings it out in all of these people. It is a challenge to stay true to yourself and the people around you every day, and we all fall short all the time.