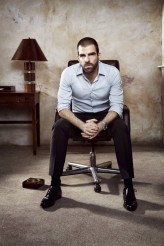 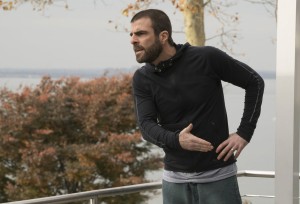 In NBC’s THE SLAP, Thursdays at 10 PM, a family get-together in Brooklyn erupts when the father of one little boy slaps another child, not his own, for recklessly waving around a baseball bat. The incident has long-lasting repercussions.

The eight-part miniseries, adapted by Jon Robin Baitz and Walter F. Parkes from an Australian miniseries that was in turn based on a novel by Christos Tsiolkas, shows each episode from a different character’s point of view. Zachary Quinto (Mr. Spock in the new STAR TREK films and Sylar on NBC’s HEROES) had coincidentally just produced the nonfiction series THE CHAIR, which followed two different filmmakers in their very different approaches to directing the same feature script. Quinto’s numerous other producing credits include the acclaimed narrative features ALL IS LOST and MARGIN CALL.

AX: How did you feel about how THE CHAIR turned out?

ZACHARY QUINTO: I think it was a really successful experiment. We set out to tell the same story through two different perspectives, and I think we did that very clearly. I’m glad it worked out the way it did.

AX: So did that give you a taste for doing a story that is told from multiple perspectives?

QUINTO: Yeah, sure. They were not connected at the time, but now that I’m a part of [THE SLAP], which does that very thing, the parallels are inescapable. I’m happy to be working on this show.

AX: Does Harry see slapping the little boy as reasonable protection of the other kids?

QUINTO: Yeah. His own son in particular, [who is] in the closest range of the bat.

AX: So from his point of view, Harry’s justified.

AX: Who plays your wife in THE SLAP?

AX: How is it playing the parent of a young child?

QUINTO: Illuminating. I was shocked that I’m old enough to play the parent of a young child, that they offered me the role [laughs]. I should be grateful that they shaved a few years off of him – the character was originally fifteen, but clearly – you understand.

AX: Well, that would be the all-time high school disaster story …

QUINTO: But I liked it. I really liked Owen [Tanzer], the kid that plays my son, who’s a really open and curious and talented young actor. So I was excited about that.

AX: Did you shoot in Brooklyn, where the story is set?

AX: Did you do any research into anything in order to play Harry?

QUINTO: The most research I did was about the Greek[-American] culture. The Greek family is a huge part of the story, and the undercurrent of what that cultural identity means and what are the dynamics in that particular ethnic group and the tribal warrior mentality and the loyalty. I’m Italian, so it’s really not that far off. But I wanted to understand that a little bit, and I have to speak some Greek in the show, so those kinds of things. It was much more about the cultural element.

AX: Harry is pretty angry. On HEROES, you played Sylar, who was another rage-filled character. Can you compare Harry to Sylar at all?

QUINTO: Obviously, their worlds are so different. I think Harry is easily identifiable as the villain of this series, but that’s sort of where the comparisons stop.

AX: Do you know whether you’re going to be involved in the revival of HEROES?

QUINTO: I’m not. I heard that they’ve got another Zach [Zachary Levi of CHUCK], so that’s exciting.

AX: What would you most like people to know about THE SLAP?

QUINTO: That it’s a tremendously talented group of creative individuals who’ve come together to make it, it’s expertly crafted and I’ve really been inspired by the work of my fellow actors on the show, so I’m very excited for people to watch it.