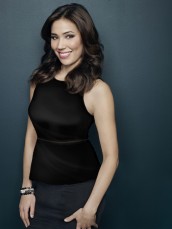 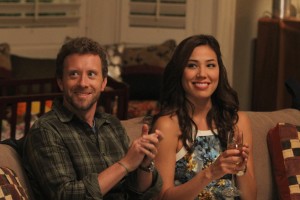 After a midseason hiatus, Fox’s BONES is back for the second half of its tenth season on Thursdays at 8 PM. The long-lived series celebrated its 200th episode – which aired right before winter break – by departing from its usual storylines about forensic anthropologist Temperance Brennan (Emily Deschanel) and her crime-solving partner/husband, FBI Agent Seeley Booth (David Boreanaz) and giving the regular cast roles in a playful one-hour ‘50s Hitchcock-style murder mystery.

Michaela Conlin, who customarily plays artist and computer genius Angela Montenegro, portrayed an LAPD stenographer in “The 200th in the 10th.” She talks about the change of pace segment, as well as her feelings about the departure of series regular John Francis Daley (Dr. Lance Sweets), who left to direct a feature film.

MICHAELA CONLIN: It was so fun to shoot, it was so fun to watch. It was great. David did a wonderful job, I thought. The music was really wonderful, everyone in the cast just did a beautiful job.

AX: How did you like working in the Fifties costumes and high heels?

CONLIN: So much fun. The waist cincher was kind of tricky after a two-week shoot, but it was so fun to see how great everybody looked and I was really just so proud of all of the cast and the crew. It was a really big moment for us. It was fun.

AX: How did you feel about John Francis Daley leaving and John Boyd coming in as new FBI Agent Aubrey?

CONLIN: Well, it was really, really sad to have John Francis Daley leave, of course. He’s just a brilliant actor and was a member of this dysfunctional family that we have, so it was super-sad, but he’s doing wonderful things and John Boyd has been a great addition. He’s such a lovely person and brings such a different energy to the role. He’s really been great.

CONLIN: This season? The two-hundredth, for sure.

AX: Any other projects we should know about?

CONLIN: Yeah. I did a movie for Relativity called THE DISAPPOINTMENTS ROOM with Kate Beckinsale that’s coming out in September. It’s sort of a psychological horror movie. I think that’s what they’re calling it.

AX: Was that a good break for you, in terms of playing a different sort of character from Angela?

This interview was conducted at Fox’s party for the Television Critics Association at Pasadena’s Langham-Huntington Hotel.