The actor talks the series' first season on SyFy 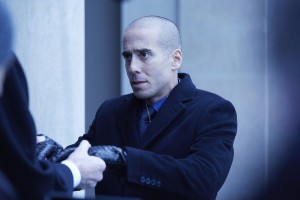 In Syfy’s Friday-night 12 MONKEYS, adapted from the 1995 Terry Gilliam film, which was in turn adapted from the French short LA JETEE, the human race is almost wiped out by a virus in 2015. In 2040, James Cole (Aaron Stanford) is sent back to 2015 to try to change history.

Cole and Jose Ramse, played by Kirk Acevedo, start out as best friends in 2040, but as Jose realizes that Cole’s efforts could prevent Jose’s family from existing, the relationship turns to one of enmity.

Acevedo is no stranger to science-fiction and primates – last summer, he appeared as a human in DAWN OF THE PLANET OF THE APES and he was two different universes’ versions of FBI agent Charlie Francis in FRINGE. Other credits for the New York native include AGENTS OF SHIELD, BLUE BLOODS, LEGENDS, THE WALKING DEAD, PRIME SUSPECT, THE BLACK DONNELLYS, LAW & ORDER: TRIAL BY JURY, OZ and BAND OF BROTHERS.

AX: Between 12 MONKEYS and DAWN OF THE PLANET OF THE APES, is it safe to say you’re going through the simian phase of your career?

KIRK ACEVEDO: Yes. It’s funny how the whole monkey theme is coming into effect. Bizarre. Coincidental. I might play the Guy in the Yellow Suit with the Big Hat for CURIOUS GEORGE. I’m joking.

AX: Obviously, you do other things, but is science fiction a big love of yours professionally or as a viewer, or is this just where the work is?

ACEVEDO: Sci-fi/fantasy is my favorite genre. Horror, too. I’ve seen everything. So it’s coincidental that I’m having to do a lot of sci-fi. For PLANET OF THE APES and 12 MONKEYS, I just kind of look post-apocalyptic because of my hair, because it was shaved, so I think that’s why I got both gigs.

AX: Did you save your head thinking, “I want this look for work,” or was it just more comfortable?

ACEVEDO: The truth is, when I had longer hair, it’s like – I hope you take this the right way – I’m too good-looking to play the lead character actor, but not good-looking enough to be leading man. So I’m in the middle. So I have to shave my head to stand out. Because I’m edgy. So I should be playing the heavy, but the thing is, when my hair was longer, I didn’t look like the heavy, but I sound and act like the heavy. So I had to do something to change things, and when I shaved my head, things changed. That’s an honest answer. Probably most people wouldn’t tell you that honest answer. It’s the truth.

AX: So it was a work decision.

ACEVEDO: Sure, a 100 percent. And personally, this is how I got my wife, was with short hair. I prefer my hair like this, which is even better.

AX: With 12 MONKEYS, did you audition, or was this an offer?

ACEVEDO: It was an offer.

AX: What did they tell you about your character?

ACEVEDO: They sent me the script and I had a good 40-minute phone conversation with Terry [Matalas, who co-created the series with Travis Fickett] and he basically described the character and said, “You’re the moral center of the show and blah, blah, blah, and you’re the best friend, and blah, blah, blah.” I love Syfy, I love their original shows, but I also love the fact that I’m only doing thirteen episodes, which is a big deal for me, because I want to do more films. So it serves a dual purpose for me.

AX: Can you talk about the core of your character Jose?

ACEVEDO: Well, obviously, I have a family in 2040, which is the present. So if I go back in the past, or Cole goes back in the past, and tries to change things, what happens to my family? I met [my wife] in the future. In the past, it was a circumstance of this plague that I met my wife. So if there is no plague, then how do I meet my wife?

[With an altered past], a different version of us would exist. If I had a wife or a child, how would I have known? But if you have that knowledge, if you have that awareness, that consciousness of those things, would you change that? That is a moral dilemma. It’s the same way with Cole. His future, his past – eventually, he’ll make a moral decision. On both sides, from both people.

AX: Playing a human, you didn’t do any makeup on DAWN OF THE PLANET OF THE APES, but you were playing opposite actors who were doing motion-capture. Did being around so much motion-capture affect your performance at all?

ACEVEDO: No. I’ve done motion-capture videogames, very similar, just three days of it as opposed to three months. But it hasn’t really affected me. Did I pick up things? Sure, as an actor, you can pick up things that other actors do, their strengths and weaknesses. That’s what we do as actors, we steal. I mean, how do we know how to play a cop? We research, we might go on one or two days and sit in a car. Most actors don’t. How you play a cop is, you watch other films, see COP LAND, see HEAT. So we steal. The minute we steal, it becomes ours anyway, because when it comes out of our mouths, it’s going to sound different than the way they played it. The same way, how do we kill someone [onscreen]? You can’t go out and kill someone, you’d be a serial killer. But you watch – you watch Gary Oldman, you watch John Malkovich, you watch all these other [actors and films], HENRY: PORTRAIT OF A SERIAL KILLER, and you steal, you take pieces. Everyone does it, Meryl Streep, Brando, they all have stolen. So it’s okay to steal.

AX: Is there anything particularly different about Jose in 12 MONKEYS from other people you’ve played?

ACEVEDO: I guess you could say he’s kind of similar to Charlie Francis. But obviously, the look is different, the settings are different.

AX: 12 MONKEYS shoots in Toronto, but the pilot was made in Detroit. How was working there?

ACEVEDO: I worked two weeks. It was fun, it was cold. I didn’t like the cold, it was Detroit. So we will be having fun.

ACEVEDO: No, I [went] to New York to do a recurring [role] on BLUE BLOODS, work with Donnie Wahlberg, who’s a good friend from BAND OF BROTHERS.

AX: Is there anything else you’d like to say about 12 MONKEYS?

ACEVEDO: It’s going to be an exciting ride for everybody and hopefully they’ll enjoy it.