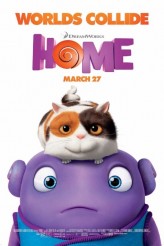 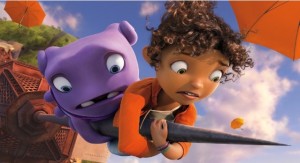 HOME succeeds in just about everything it sets out to do. It is funny, charming, entertaining, big-hearted and has a message that is at once clear enough to be understood by young viewers and woven into the storyline so thoroughly that we don’t feel lectured. Its animation suits the narrative style with pleasing details – note our heroine’s head full of realistic bouncing curls – and yet conveying the sense that the audience could perhaps re-enact scenes with Play-Doh if so inclined.

In HOME, we meet Oh (voiced by Jim Parsons), a member of the alien Boov species. Boov are little flexible purple beings who are proud of their ability to run away and hide. Having become the quarry of the fearsome Gorg, Boov Captain Smek (voiced by Steve Martin) decides that Earth will make a splendid hiding place.

Smek is certain that the Boov will make things better for primitive humans, who are relocated into a number of settlements. The Boov move into human homes, where they generally don’t know the purpose of most objects. This leads to a lot of football-eating and tire-wearing.

Oh has a very un-Boovian desire for friends. This leads him to try to throw a party, which gets him into very bad trouble indeed. His efforts to run and hide make him cross paths with Tip (voiced by Rihanna), a young girl who is determined to find her relocated mother Lucy (voiced by Jennifer Lopez). Not surprisingly, Tip and Oh don’t get along well at first, but gradually they begin to appreciate each other.

There are plenty of obvious visual jokes – the Silly Putty nature of the Boov, the aliens’ habit of changing colors when experiencing strong emotions – and a few bathroom jokes that will probably appeal to some kids more than others, but everything works very well. Director Tim Johnson and screenwriters Tom J. Astle & Matt Ember, adapting Adam Rex’s novel THE TRUE MEANING OF SMEKDAY, have the gift of knowing exactly how long to allow each moment and when to move on. They hit the expected emotional notes, but also present some fairly sophisticated concepts, like why technical superiority doesn’t necessarily equate to moral superiority and why it’s not a good idea to suppose you know what’s best for a group of strangers, in ways that kids can easily grasp. Beneath the crowd-pleasing aspects, there’s a lot of sophistication and subtlety here.

There’s also the perfect voice performance by Jim Parsons as Oh. Full of hope and enthusiasm, with some smugness but a true sense of wonder, it’s impossible to imagine the film with anyone else in the role. Rihanna persuades us of Tip’s youth and passion and underlying kindness. Martin is splendidly smarmy as the self-serving Smek and Lopez is fine as Lucy.

Both Rihanna and Lopez make contributions to the pop-studded soundtrack. Again, although HOME is not a musical, the filmmakers employ the songs to move the story forward, setting them to action, rather than just stretching the music over static montages.

HOME is delightful. It’s uncommon to find a family film with a message that lands as effectively yet lightly as this one, and rarer still to find a movie that’s so much fun and yet says so much.