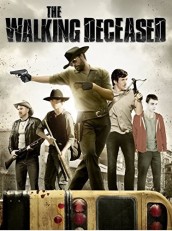 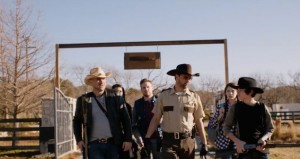 Movie parodies used to be something of a rarity. And then they were not based on current pop culture but on a genre of cinema. AIRPLANE was not based on a slew of shows about airplanes but rather the dramas and action flicks of the time with a unique storyline and comedic slapstick.

Parodies remained a rare thing in Hollywood until the SCARY MOVIE franchise emerged and made a ton of money causing a slew of remakes and spinoffs covering all sorts of genres – teen love stories, action flicks, science fiction and more. So it’s not surprising that finally someone has done zombie movies as a parody in THE WALKING DECEASED.

Here, the outbreak in THE WALKING DECEASED was a simple case of a restaurant owner not washing his hands and preparing sushi or so the movie opens explaining why the dead walk the earth. But unlike some of the films with plenty of fodder to choose from this is limited to only a handful of movies and really only covers THE WALKING DEAD, ZOMBIELAND and WARM BODIES (although SHAUN OF THE DEAD and DAWN OF THE DEAD make an appearance as well).

The film begins with Sheriff Lincoln (Dave Sheridan) awakening from a coma after 5 weeks into the zombie apocalypse and immediately meets Chicago (Joey Oglesby), Green Bay (Tim Ogletree), Brooklyn (Sophia Taylor Ali) and Harlem (Danielle Garcia). He meets up with his son Chris (Mason Dakota Galyon) that happens to be running zombie strip joint with his still-alive mother as the main attraction. There happens to be two familiar British blokes watching the action as well. After the mother is bitten and put down. Lincoln and his son (who he keeps referring to as Corral, naturally) meet up with the ZOMBIELAND people and move to a mall where they encounter a friendly and horny zombie who calls himself Romeo (Troy Olgetree).

The problem isn’t necessarily that they are working with limited material here is that what they deliver just isn’t that funny. The other problem is that ZOMBIELAND itself is a parody of zombie movies and by focusing so heavily on it doesn’t make much sense because what we got in that movie was so much funnier than anything here. Plus, either because of licensing or uncreative reasons what they use from THE WALKING DEAD is strictly related to Rick Grimes and Carl, when there is so much more that could have been used. They should have stuck strictly to the main canon and parodied NIGHT OF THE LIVING DEAD or 28 DAYS LATER as there could have been some real fun with these.

While THE WALKING DECEASED isn’t bad and is fairly well done from a production standpoint especially for a B movie, it could have been that much better if they’d focus on some of the other material available in the genre.

THE WALKING DECEASED is in theaters and VoD on March 20.