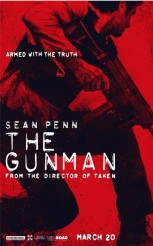 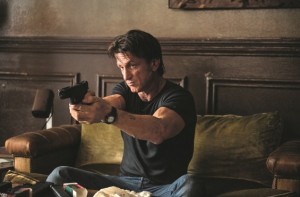 It may well be that the Jean-Patrick Manchette novel that is the basis for THE GUNMAN is a masterpiece of suspense. The movie version, scripted by Don MacPherson and Peter Travis and directed by Pierre Morel, is not. This would be less of a problem if THE GUNMAN wasn’t trying to be, among other things, a mystery, when the only real puzzle is why protagonist Jimmy Terrier, played by Sean Penn, takes so long to figure out what most of the audience will deduce immediately.

Jimmy is part of a hit squad masquerading as security for a medical team in Africa’s volatile Congo region. As the triggerman in the killing of a Congolese government minister, Jimmy has to leave the moment the assassination is complete. On a regional scale, this is disastrous, causing tensions in the nation to violently explode. On the personal front, this means Jimmy departs without being able to say goodbye to his girlfriend, French doctor Annie (Jasmine Trinca).

Eight years later, Jimmy has returned to the Congo, digging wells with a relief organization in an evident attempt to atone for the havoc he wrought earlier. When three killers come looking for “the white man,” Jimmy deduces they’re after him. But who sent them?

It takes Jimmy a really long time to figure this out. It will take most viewers – at least, those who’ve seen other movies in this genre and/or watch narrative television – much less thought to come to the correct conclusions. Again, this would be fine if the film didn’t drag itself out while reinventing the wheel.

THE GUNMAN also aspires to be a character study, but apart from wanting to sort out the situation around him and looking haunted, Jimmy himself is not depicted in a nuanced manner. This isn’t the fault of Penn, who invests his character with soul, but there’s only so much that can be done when the material won’t cooperate.

Further, some of the other characters are almost sketches. Trinca’s Annie is particularly shortchanged by the script – she seems to abandon her medical calling for no reason other than that, after toiling selflessly in her vocation, she feels the need to be taken care of by a man. The subplots that come out of this don’t play well, to put it mildly.

Javier Bardem and Mark Rylance do their best with roles that get wacky, while Ray Winstone and Idris Elba provide stalwart support as characters who may be underwritten but at least don’t have to say or do anything embarrassing.

Penn has buffed up impressively for the action sequences, where THE GUNMAN is on surer footing. There are a lot of good chases, shootouts and fistfights. The credit stating that Barcelona is in reality an anti-bullfighting region is much appreciated (by this reviewer, at least). But it’s all in the service of a story that we’re used to see resolved in about forty-three minutes of a network procedural television show, and it doesn’t have the grace notes to compensate for the lack of originality.