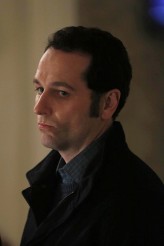 The actor talks the Paige situation, managing Martha - and omelets 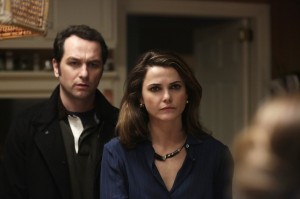 On FX Network’s THE AMERICANS, now in its third season Wednesdays at 10 PM and renewed for a fourth, Matthew Rhys and Keri Russell star as, respectively, Philip and Elizabeth Jennings. It’s the early 1980s and Philip and Elizabeth are an outwardly all-American married pair of travel agents living in suburban Virginia with their two children, Paige (Holly Taylor) and Henry (Keidrich Sellati). However, what even their offspring don’t know is that Philip and Elizabeth are really deep-cover KGB agents, sent here by the Russian government to advance the Soviet cause.

The arranged marriage between the two protagonists has become a real one over time, but there are strains. This includes the fact that Philip, in his undercover guise as “Clark,” wound up having to marry FBI secretary Martha (Susan Misner) to protect his cover. Martha has recently discovered that “Clark” isn’t quite who he says he is, but she still loves him and is far from knowing the whole truth. Then there’s the problem that the KGB would like Philip and Elizabeth to induct teenaged daughter Paige into being a second-generation deep cover agent. Elizabeth, a true believer, thinks this might be a good idea; Philip is adamantly opposed.

Rhys, who was previously a regular on ABC’s BROTHERS & SISTERS, also starred as Fitzwilliam Darcy in the BBC/PBS miniseries DEATH COMES TO PEMBERLEY. The Welsh actor’s real speaking voice as he discusses THE AMERICANS is nothing like any of the accents he employs for Philip or any of Philip’s many disguises.

AX: Do you think the philosophical difference between Philip and Elizabeth regarding whether they should try to recruit Paige for the KGB is like, Elizabeth sees it as, “We’re Navy SEALs and we should give our kid the opportunity to be a Navy SEAL, this is a great thing,” and Philip is like, “She could get shot”?

MATTHEW RHYS: Yes, because as much as [Elizabeth] says that “she should know who we are,” there’s an enormous breakdown in communication, that that is never really communicated. Her language is incredibly specific as toward recruiting [Paige], that’s why there’s an acute breakdown in this relationship. Also, I don’t think Philip wants anyone to indoctrinate her. She should make her own decisions. And the fact that [Paige has] found solace and family in something like the Church isn’t a shock, because they’re absolutely absent parents. So he doesn’t blame her for doing that. She’s on her own path, and it may not even last a year, but she should take that path herself.

AX: What do you think Philip actually thinks of Martha? Do you think he has actual affection for her?

RHYS: I do. I think with each season, and obviously, the deeper, the longer this goes on, I think he’s a man of great humanity, Philip, and I think he becomes far more painfully aware of the manipulation of this woman’s life and her feelings, and the deeper it becomes, the harder it becomes. And it’s that juggle between mission mandate and human interaction.

AX: Martha has expressed that she really wants children, though she’s backed off of this lately. Do you think that Philip, or “Clark,” would want to have kids with Martha, if it were a real relationship?

RHYS: Yes. I think very specifically, this is my own back story, Philip targeted Martha because she was a lonely person and I think the manipulation of that is quite a cruel thing to do. Yes, in a real relationship, I’m sure he would want to give her exactly what she wants.

AX: Do you think Philip would have qualms about killing Martha if he had to?

RHYS: I think he’d have huge qualms. I think it would be an incredibly difficult thing for him to do. It’s the off-set of what’s the greater risk. If it’s her turning him in, which will ultimately lead to his incarceration and separation from his kids, then yes. I think the kids are the linchpin. If it’s a threat to their life, then yes.

AX: Sex seems to play an important part in the relationship for Martha …

RHYS: The sex in the relationship is such an enormous part of it, and in an entirely different way than it is with [Philip and] Elizabeth. So I think Philip realizes it’s a large appetite of Martha’s that needs satisfying. So it’s one part of the many pieces that he needs to maintain in order for its smooth running.

AX: There was a particularly physically complicated sex scene between Clark and Martha. Was it as physically difficult as it looked, or was there some movie magic? You couldn’t even use your hands for balance. 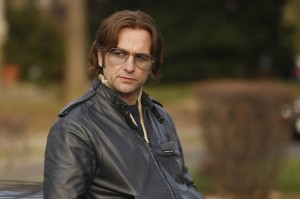 RHYS: No, it was difficult. We had to stand on one foot. It’s like, “I don’t even know how they did this.” It’s one of the most uncomfortable things you could try. I don’t recommend it.

AX: Do you have a favorite one of Philip’s disguises?

RHYS: I do, I do. I call him Fernando. He has a moustache and long hair and sometimes a little goatee and he’s usually in janitor clothes.

AX: How much time does it take to put the disguise on?

RHYS: He’s not too bad. He’s about an hour in the [makeup] chair.

AX: Which one takes the longest?

RHYS: Clark’s about an hour-and-a-half, because the wig needs a lot more attention, and then there was one army veteran that I did which had a huge beard and huge hair. That was about two hours.

AX: Which one made you feel sexiest?

RHYS: [laughs] Fernando makes me feel sexiest. I kind of had him as a Spaniard for some reason, I don’t know why, a flamenco teacher.

AX: Doesn’t Martha ever run her hands through Clark’s hair and wonder why he’s wearing a wig, and don’t the Jennings’ neighbors ever think, “For travel agents, they’re sure driving around a lot at night”?

RHYS: Those questions have been posed. But yes, in the second season, Martha admitted that she knew he wore a wig. I would love to see more of an exploration of her asking why he wears the wig. But it was kind of moved on a little quickly.

RHYS: Money [laughs]. There’s more money here. The production values, the scale is bigger. Craft service. You don’t have craft service in the U.K. There’s a tea urn and a coffee urn. At the end of the day, it’s a few key elements. If the writing is good and it begins there, and the other planets need to align – acting, direction and design – if those key elements are in place and everything’s working, it should work. But it’s the alchemy of those elements that is often hard to get right.

AX: Do you have any projects coming up we should know about?

RHYS: That was a tiny part I had in a Bradley Cooper movie [ADAM JONES] that’s out in October. It’s a Weinstein movie where we play rival chefs, but not a huge part. We’re both playing Michelin-starred chefs and I have one scene where I have to make him an omelet. I thought I could. I thought it’s going to be easy. And we had a couple of Michelin-starred chefs on set, helping us, and they said, “Oh, no, no, this is what you start with. The omelet is what you start with. If you want to be a true chef, there’s an art to an omelet.” And when they showed me, I was like, “Oh, I’m not even on the same planet as you.” I wasn’t even close to what they could do with an omelet. And it amazes you, something so simple, you just go, “How do you turn it something sort of ethereal?” But they do.

AX: How was taking a break from THE AMERICANS and doing DEATH COMES TO PEMBERLEY?

RHYS: That was so great. The luxury in this job is the variety, and if you’re playing a Russian spy one month and then you’re playing Darcy the next …

AX: Is Philip one of your favorite roles that you’ve played?

AX: What’s the other one?

RHYS: I played Benjamin Braddock in a stage adaptation of THE GRADUATE in the West End with Kathleen Turner. That was a real favorite.

AX: If you had your choice of what to do next, what would it be?

RHYS: I’d love to go back on stage. West End or New York would be the dream.

AX: Do Russians in the U.S. come up to you and comment on THE AMERICANS?

RHYS: There’s only one Russian that’s come up to me. He was in Central Park and he just wanted to say how much he enjoyed the show, and that was literally about it. I wanted to quiz him a bit more, but he said it didn’t make him pro or against anything. He said as a human story, it’s what interests him.

This interview was conducted during FX’s press day for the Television Critics Association at Pasadena’s Langham-Huntington Hotel.