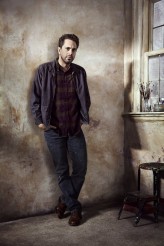 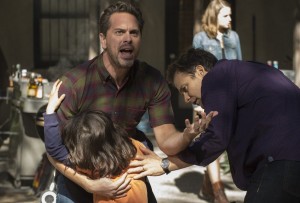 In NBC’s miniseries THE SLAP, which concludes Thursday, April 2, Thomas Sadoski plays Gary, the father of a little boy who is slapped by Larry (Zachary Quinto), the father of another child. The incident causes an already tense family and social situation to combust in Brooklyn; the miniseries has been adapted for U.S. television by Jon Robin Baitz and Walter F. Parkes from an Australian series, which was based on a novel by Christos Tsiolkas.

Sadoski, born in Connecticut and raised in Texas, has a career that spans theatre, film and television. He recently appeared in the feature JOHN WICK alongside Keanu Reeves and costarred in HBO’s THE NEWSROOM.

AX: Jon Robin Baitz is well known as a playwright. Have you done Baitz on stage at all?

AX: Did that factor into you doing THE SLAP?

AX: In THE SLAP, Gary’s wife goes ballistic after the title incident. Is Gary supporting his wife in her outrage, or is he outraged on his own behalf?

SADOSKI: A little of both, but the great thing about Robbie’s writing is that there’s no one clear, distinct line that anybody particularly toes. I think one of the exciting things about playing this part is that it’s a great arc to it. Initially, the rage is there – he just slapped my child and we’re going to put this guy away. As the story develops, you start to see more shades of gray. People start to open up and it starts to become a story about redemption and forgiveness and maturity, not just for the children, but also for the adults, who have some maturing to do as well.

AX: How does Gary feel about the fact that his wife is breast-feeding their five-year-old?

SADOSKI: I have my own personal opinions about that – I think I’d probably be a little bit uncomfortable myself if I were to see something like that, but as the actor, I don’t get to make those judgments. I think the character is a little nonplused. I think he recognizes that perhaps it’s time to stop.

AX: I’m guessing from that fact that he may be the more relaxed one in that marriage?

SADOSKI: Yeah, he’s a painter, he’s a very bohemian, easygoing guy, doesn’t like a lot of drama around him, and this obviously sort of sparks it all off.

AX: How did it feel going from hard-charging character on THE NEWSROOM to a painter?

SADOSKI: It’s great. I’m having a great time with it. I loved playing Don Keefer, it was an exciting thing for me, I was very happy to have done it, I’m very happy to play other characters now. I’m very happy to be involved in THE SLAP, I’m really excited to see what sort of trouble we can start with this [laughs].

AX: Did you research anything in order to play Gary?

SADOSKI: Yeah, I spent a lot of time looking at the works of Eric Fischl, who’s a great painter, a really extraordinary artist and an artist who Robbie and Walter and I have discussed [and] Gary’s work closely resembles. I wanted to just get a sense of that sensibility that Eric has. It’s very intelligent, but very laid-back, not afraid to be controversial, but simultaneously a little bit back-footed, a very smart guy. It was cool to get to know his work.

AX: Any other projects we should know about?

SADOSKI: I have a movie called I SMILE BACK with Sarah Silverman and Josh Charles and myself, a really, dark, dark, gnarly independent film. I’m really proud of Sarah, she really went out there and got dirty with it, it was really cool to be a part of, and I’m doing a new Neil LaBute play in New York in the spring, I think with Amanda Seyfried.

SADOSKI: Watch it. This is not something you’ve seen on network TV before. It’s an extraordinarily well-written piece of television, incredible talent everywhere you look, not just in the cast, but the producers, behind the camera, everybody. It’s something to check out.