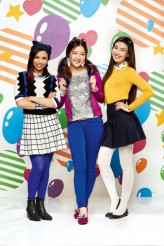 MAKE IT POP: Louriza Tronco gets sassy and sarcastic on Nick’s new show 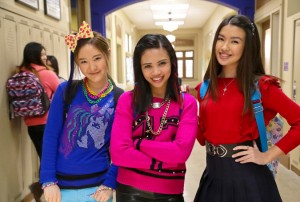 Actress Louriza Tronco describes her MAKE IT POP character this way: “Jodi Mapa is the fierce choreographer and fashionista of the group. She’s sassy and she’s very sarcastic.”

In MAKE IT POP, the musical comedy series on Nickelodeon weeknights at 7 PM through Friday May 1, Jodi is one of three prep school roommates (the others are played by Erika Than and Megan Lee) who team up to form a pop band, with music provided by male classmate Caleb (Dale Whibley).

Tronco began her stage career at an early age in her native Winnipeg, Canada. TV and film credits include CULT, MY BOYFRIEND’S DOGS and NIGHT AT THE MUSEUM: SECRET OF THE TOMB. When Nickelodeon has a press day for MAKE IT POP at Hollywood’s Paramount Studios, Tronco sits down to talk about all things Jodi.

LOURIZA TRONCO: My mom brought me to the Royal Winnipeg Ballet’s THE NUTCRACKER audition when I was about seven years old, and I had no dance training at all at that time, but for some reason, I was able to get it, and I was so excited, and that led me to dance lessons and then eventually singing and acting.

AX: Were you a ballet fan before your mom took you to the audition?

TRONCO: I literally showed up in dress pants and a long-sleeved t-shirt, and I was surrounded by all these girls with buns and leotards on I was like, “I have no idea what’s going on, but this is fun.” [laughs] And I just danced with these girls and I ended up becoming a mouse.

AX: In the show, Jodi is a choreographer and designer. Do you have any choreographic or costume design experience in real life?

TRONCO: I don’t have any costume design experience, but I grew up doing tap, jazz, ballet and hip-hop, so yeah, it’s really cool to be able to apply that to my work.

AX: Have you choreographed for other people?

TRONCO: Yeah. I taught at a studio in Vancouver, and in central Canada, Winnipeg, as well.

AX: Do you have any input into the choreography for Jodi in the musical numbers?

TRONCO: Oh, yeah. Addy Chan’s an amazing choreographer. She is actually from Vancouver. She lived in Vancouver as well. She’s really great at making everybody look good with her choreography, and she actually asked me to do the splits because she saw me doing the splits in the call back [audition], and when she found out I was cast, she was like, “You pulled out the splits there for the last thing. Do you feel comfortable doing it for one of your things?” I’m like, “Yeah, absolutely.” She’s really great to work with.

AX: How is it being a part of this ensemble?

TRONCO:  I think with any television series or any film, chemistry is very important between a group, especially ensemble work with anything, really. Acting is also reacting and playing off each other. Obviously, we like to come to set prepared with knowing our lines and being prepared with knowing what’s going on in the scene, but our group is very open to suggestions playing off each other, because if you don’t play off each other, it won’t work well onscreen. You want to be able to look like a group and mesh well together.

AX: At least at the beginning, it looks like Jodi is meshing romantically with Caleb.

TRONCO:. Maybe, maybe not. You’ll have to tune in to check it out.

AX: How is playing the flirtation scenes?

TRONCO: Well, working with Dale, he makes it easy. He’s very nice, he’s very easygoing. He really looks out for us girls because he’s basically the lead guy on the show and he’s very easy to play off of.

AX: When the three of you are singing together, do you take different vocal parts based on your voices?

TRONCO: For sure. When it comes to harmonies, I’m a high soprano, Erika is kind of a low alto, and Megan, I think she’s more of a belter. So with harmonies, it usually goes that way. When it comes to who sings solos and how much someone sings on a song, it really depends on what storyline is going through and how the song combines with the story, so it’s very versatile. It just all depends on the story.

AX: Is this the type of music you like to listen to when you’re not working?

TRONCO: I love all kinds of music, really – anything that I could dance to. I think that’s something really cool about the series – music is a universal language and I think it’s just important if I can relate to it, I think that’s what’s most important.

AX: Do you relate to Jodi as a character?

TRONCO:  We are very similar in that we share the passion for dance and music as well, and we both kind of have the same sense of humor. I’m really focused on telling her story and what I can do to benefit [depicting] her character.

AX: Jodi and Sun Hi both have colorful hair extensions – how come the principal is mad at Jodi for hers and not mad at Sun Hi?

TRONCO: I’m pretty sure [the principal has] enforced the rule with everybody. Jodi’s definitely the first person she’s seen with that kind of thing. We’re trendsetters.

TRONCO: I do have a driver’s license, but I don’t have a car. Where I live in Vancouver, it’s easy to get around – everyone loves to bike and stuff like that. I like motorcycles, but I don’t think my parents would like me to drive one [laughs].

AX: And do you have any hobbies when you’re not on set?

TRONCO: I love cooking. I love cooking for everyone. I think it’s a great way to work but still enjoy the success of your work, and I love to dog-watch. I love dogs.

TRONCO: No. I have two older brothers, though [laughs]. I wish I had one. I’m obsessed with French bulldogs, so hopefully one day. I just want to make sure I’m ready to take care of one, because it’s a lot of responsibility to take care of a dog and I don’t want to take on something that I can’t handle.

AX: Back to MAKE IT POP, you have now performed live Erika Than and Megan Lee. How was that?

TRONCO: It was amazing. That was our first live performance together, actually. We’ve been so busy with the series, we haven’t been able to focus on the band aspect. It was a great place, everyone was super-supportive and we had a great time.

AX: Do you have a favorite scene or song or moment from the show?

TRONCO: I think “Spotlight,” the very last song from the pilot, was a lot of fun. Every girl’s dream is to have a cool pillow fight with feathers floating around, so I think that was literally a dream come true for me to do that.

AX: And what would you most like people to know about MAKE IT POP?

TRONCO: That they’re going to love it.