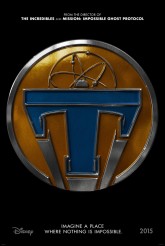 Some fun moments, but more didactic than entertaining 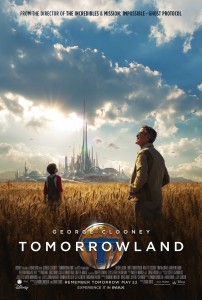 Supremely well-intentioned and very uneven, TOMORROWLAND is a movie that’s easier to appreciate than to actually enjoy. Yes, it has some great concepts and delightful moments, but it also has long stretches that feel borrowed from dozens of other kid-friendly quest stories, along with some expository dialogue that goes on longer than is safe.

TOMORROWLAND starts with a lovely bit of pre-film innovation: instead of the standard Walt Disney castle logo, we get the space-age version. It’s definitely worth arriving on time to see.

We then get an introduction to Frank Walker (George Clooney) and Casey Newton (Britt Robertson), where she’s trying to coax him to tell the story we’re about to watch. The further along we go in TOMORROWLAND, the more we wonder exactly what this is meant to achieve. Yes, Frank reminds us of a variety of awful things happening on the planet and it puts Clooney onscreen before he disappears for about the next third of the film, but since it won’t be news to even most young viewers that the world is having problems and it’s perfectly clear who Frank is when we catch up with his character as an adult again, this seems to be a time-consuming detour.

The movie switches over to one of its most charming segments, set in 1964, when then-eleven-year-old Frank (Thomas Robinson) visits the World’s Fair with his homemade jet pack. Here Frank is tapped by smart, pretty Athena (Raffey Cassidy) to go on the “It’s a Small World” ride and explore a section that few others get to experience.

This part should appeal to practically everybody. Riders at Disneyland would all love it if one of the attractions turned out to lead somewhere other than the exit gate, and Frank’s rocket pack comes in very handy.

We then arrive in the present, where Cape Canaveral teen Casey is trying to sabotage the destruction of a NASA platform so her NASA engineer dad (Tim McGraw) can keep his job. Then Casey finds a Tomorrowland pin that literally transports her into an environment where she can see the futuristic city ahead of her. Trying to find out what it all means, Casey encounters Athena, danger, Frank and more danger.

Through no fault of actress Robertson, Casey is given behavior and dialogue that feel straight out of an average young-adult TV show. Meant to be special, the character freaks out, whines, tries to run away and otherwise does things that not only prevent the plot from advancing, but are counter to Casey’s stated intentions. She knows the pin has unique, unworldly properties – why is she so stunned when someone who knows about the pin isn’t exactly Jane Average?

Things pick up again when Casey crosses paths with Frank, whose home is a veritable treasure trove of inventions. The ways in which these things work and how they are employed in rapid succession is greatly enjoyable.

However, it’s only now that the plot takes hold. That’s a long time for us to not know exactly where we’re going, what we ought to fear and what our heroes are meant to be doing. It wouldn’t matter so much that the story doesn’t gain momentum, except that a lot of the journey simply recycles character traits that seem pulled from a manual. Casey and Frank both have to resist becoming involved in this adventure at first because that’s what characters like them are supposed to do, never mind that the resistance isn’t novel or funny or results in anything that wouldn’t have happened otherwise.

The aims of TOMORROWLAND are very worthy and its message is solid. As a film, it flirts with joy, but doesn’t know how to maintain it.