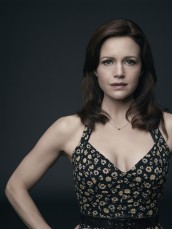 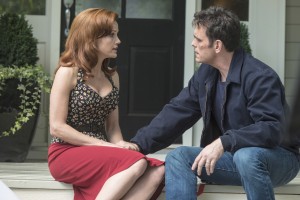 In Fox’s ten-hour miniseries WAYWARD PINES from executive producer M. Night Shyamalan, Thursdays at 9 PM, Carla Gugino plays U.S. Secret Service Agent Kate Hewson. When Kate disappears, her partner Ethan Burke (Matt Dillon) goes searching for her and winds up in the small town of Wayward Pines, Idaho. Kate is there – except she’s apparently been here for twelve years, while Ethan has only been here overnight.

Kate isn’t Gugino’s first role as a federal agent. She starred in the title role of the TV series KAREN SISCO, based on the character Elmore Leonard created in his novel OUT OF SIGHT. Gugino also guest-starred as a federal agent, first name Karen, in JUSTIFIED, also based on Leonard’s work.

The Florida-born Gugino is about to appear on the big screen in SAN ANDREAS opposite Dwayne Johnson. Other credits include MATCH, SUCKER PUNCH, WATCHMEN, ENTOURAGE and CALIFORNICATION. At a party thrown by Fox Networks for the Television Critics Association, Gugino talks about Kate and Karen.

CARLA GUGINO: She is very different. Karen was officially a U.S. Marshal. I mean, you have Secret Service, U.S. Marshal, pretty similar. But this woman [Kate] is somebody who has basically had to go into another world and kind of use her prowess at a really good cover. And that’s something that Karen didn’t have to do. I just recently did an evening for Elmore Leonard’s memorial and it was an amazing thing to remember. He was, as you know, one of our greatest writers, but tonally, it’s a totally different kind of role, which is what made it. I don’t even feel like they are siblings of each other, these characters, other than by profession. 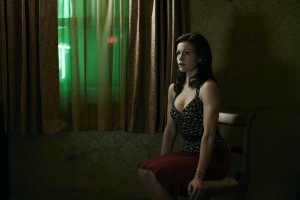 AX: When you were on JUSTIFIED, in your mind, was that character Karen Sisco?

GUGINO: Okay, here we go. What you probably think is right. Some people get married and they change their last names [laughs].

GUGINO: The most interesting thing to me about WAYWARD PINES is that it’s a true mystery, in the sense of the best kinds of mysteries that I love to watch, which is there are all these puzzle pieces. You get enough pieces as an audience that you think you can put the puzzle together and it will still fit, and then you’re going to start to see how it happens.