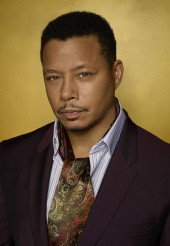 The actor talks his new Fox series about family, power and hip hop 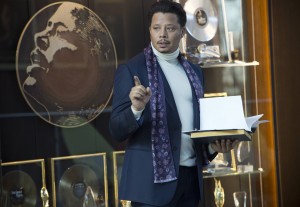 In EMPIRE, the new Fox series airing Wednesdays at 9 PM, Terrence Howard plays hip hop music kingpin Lucious Lyon. When he is diagnosed with ALS, also known as Lou Gehrig’s Disease, Lucious feels he must leave his power and fortune to one of his children – but which one? The choice is complicated by the reappearance of his ex-wife Cookie, played by Taraji P. Henson, who has emerged from prison feeling that she is entitled to at least some of what Lucious has.

Howard and Henson have worked together before in HUSTLE & FLOW, which also dealt with the music industry. Howard also worked previously with EMPIRE creators Lee Daniels and Danny Strong on the feature film LEE DANIELS’ THE BUTLER, which Daniels directed and Strong wrote. The prolific Chicago-born actor also has a major role in another Fox series, the upcoming WAYWARD PINES.

Howard is at a post-premiere party for EMPIRE thrown by Fox atop the Hollywood W Hotel, where he answers a few questions about the series.

ASSIGNMENT X: What drew you to this project?

TERRENCE HOWARD: Just the opportunity to work with Lee Daniels and work with Danny Strong, but really to work with Taraji. And then the fact that I didn’t think the project would work. I thought that the subject matter was a little ambitious and that at the end of the day, it was going to fall. But that’s what every actor wants. You want something that’s a challenge, and to have this kind of reception, I think it’s fantastic.

AX: Why did you think it wouldn’t work?