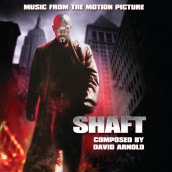 Honkeys had their gun slinging, women-bedding superhero named James Bond for years until a 1971 sex machine named John Shaft showed that a black private dick could be just as bad-ass, especially when it came to an urban action-funk groove that got Isaac Hayes an Oscar winning song and nominated score. So perhaps it was a little ironic that a “white bloke from Luton” who’d been busy scoring 007 would land the music gig for John Singleton’s 2000 reboot, giving Sam Jackson a tailor-made vehicle to cement him as a big screen mofo. But even given Arnold’s urban pedigree that might have been way lower numbered than 110th Street, the English musician truly showed he could do that way uptown walk in style, paying tribute to Hayes’ inimitable vibe while carving out a fresh rhythm for Shaft’s new incarnation – all while not selling out the spy friendly orchestral energy that Arnold had used to put new, pop-retro action into the Brosnan-Bond rebirth he helped spur.

The result is a score that plays with all the energy of funk-driven 007 score like TOMORROW NEVER DIES and THE WORLD IS NOT ENOUGH, while being just as cool a listen for old school fans of Hayes (who put his stamp of approval on Arnold’s approach). But what gives his SHAFT its own identity is how well Arnold uses his distinctive, dangerously lush string-brass sound with the improv energy of a Hayes-style band. Not only do their wah-wah guitar, electric organ, horn section and percussion grooves play freely over a tight, dramatic orchestra, but they go beyond riffing on Hayes’ sound (and occasionally his iconic theme) to go into the realms of wild Miles Davis “Bitches Brew”-style jazz and electric hip hop. It makes SHAFT a shaken and stirred action jam both befitting her majesty’s secret service and an a soul brother, whose score proper now finally hits the street in style with La La’s generous 76-minute release, with Tim Grieving’s excellent liner notes getting down with Arnold on the composer’s desire to authentically update the SHAFT sound without losing its cool.

Click on the link to Purchase the SHAFT soundtrack