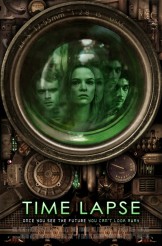 While not quite up there with 2004’s low-budget mind-bending time-travel thriller PRIMER, TIME LAPSE is a smart, pretty tight story that uses narrative invention and a single sci-fi element in lieu of production money.

Directed by Bradley King, who co-wrote the clever screenplay with BP Cooper, TIME LAPSE introduces us to three roommates: would-be writer/current waitress Callie (Danielle Panabaker), artist and courtyard complex manager Finn (Matt O’Leary), who’s also Callie’s boyfriend, and gambler Jasper (George Finn). Checking on a tenant across the way, Finn and Jasper discover a) that the man is dead and b) there’s a strange camera in the man’s home aimed straight at their window. The camera takes and pops out a Polaroid every night at exactly 8 PM – showing an image from the following night at exactly 8 PM. Once it’s clear to the trio what’s happening, Jasper figures out a way to exploit the phenomenon, without fully thinking through the implications.

There are a number of ways TIME LAPSE could go, and it piles on plot twists and paradoxes in the last reel too quickly for them to really pay off. Even so, the build-up works very well. There’s so much tension in all the different angles between the three main characters and the details of the photographs that we are not the least bit bothered that we never leave the courtyard complex. The design of the machine is properly both old-fashioned and plausibly functional (one could imagine it in the old TWILIGHT ZONE, yet it looks at home here and now) and we get enough answers about it to feel at once satisfied and still curious.

The dialogue occasionally gets a bit on the nose, but it works well most of the time. Panabaker handles all aspects of her role well, O’Leary conveys resignation and wariness effectively and Finn makes the most of Jasper.

What’s most fun about TIME LAPSE is to see how much information and foreboding can be packed into the small, mundane space covered by the Polaroid photos and to try to guess where things will go from one to the next. The game seems to change at one point, which is fair enough, but a clearer explanation of what’s going on after this would be welcome.

Even so, among the many inexpensive indies shot around Los Angeles, TIME LAPSE stands out. It makes the most of its assets and never appearing to need any more than it has to tell a reasonably engrossing tale of speculative film noir.