Home » On the Waterfront soundtrack review 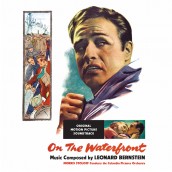 CD Review: ON THE WATERFRONT soundtrack

There are composers like Philip Glass (CANDYMAN) who start out in the concert hall, and go onto blaze impressive new careers in Hollywood. Then there are those like Andre Previn (ELMER GANTRY), who prolifically begin in tinsel town, only to leave it completely behind. And then there are such maestros as John Corigliano (ALTERED STATES), who briefly tread in Hollywood while making sure not to quit their day jobs, leaving behind a precious few soundtracks that show the dazzling movie career that could have been. On that note, perhaps no conductor could have been a Hollywood contender like Leonard Bernstein, proof positive being the knockout score for the 1954 classic ON THE WATERFRONT, a film that showed he had the stuff to venture from the elite-filled New York Philharmonic onto the city’s crime-swamped docks with wild, dramatic abandon that’s proof positive that movie scores walked tall as the new classical music for the masses.

Few conductors really brought classical music to the people like Leonard Bernstein, who was also quite busy with Broadway musicals as he performed works by The Masters, whose work was arguably the “pop” music of the past. The time of the 1940s and 50s that marked his ascent was also an impactful era where audiences were being impressed with the work of such modern classicists as Aaron Copland, not to mention being wowed by the revolutionary visual work of such mavericks as Elia Kazan, who’d made a smash transition from stage to screen with GENTLEMAN’S AGREEMENT and A STREETCAR NAMED DESIRE.

That film’s bawdy jazz score by Alex North essentially broke the Eastern European mode of opera-based scoring into a new, dynamic directions that were muscularly American in nature. Kazan’s exciting tastes were in equally fine form when he brought on Bernstein for his first major score with ON THE WATERFRONT, a movie whose tale of Terry Malloy, a mug facing off against union corruption, served for many as Kazan’s screw-you to those who frowned on his finking of former Hollywood Communist friends to the HUAC red-baiting committee. But no matter how one might read ON THE WATERFRONT, the cinematic result was a blockbuster of black and blue emotion, all hammered in with raw poignancy by Bernstein. His work is particularly reminiscent of Aaron Copland, especially in its balletic movements and incorporation of jazz and the orchestra – but with firm musical control of that untamed idiom (though boozy jazz-blues source is to be had here). There’s heartbreak and trumpeting nobility to spare in Bernstein’s theme for this washed-up boxer turned dockworker, a deeply melodic sense of a bum who’s nearly gone down for the count in life, yet is possessed with enough dignity not to take the complete fall.

Terry’s emotion is played for all of its raw vulnerability through Bernstein’s flute-topped strings, his themes are no more vulnerable than during the romantic scenes, or tearfully moving as its downtrodden hero discovers his mob brother’s sad fate. The darkness of the unstoppable corruption around Terry is made through sharp percussion and ominous brass that comes raining upon on him with roundhouse blows, with notable use of tri-tone menace (a modernistic technique employed even more furiously by Kazan’s next NYC composing discovering of Leonard Rosenman for EAST OF EDEN). Though WATERFRONT might not be quite as radical as North’s score for “Streetcar,” it’s one of the most seminally dynamic meetings of traditional symphonic film scoring with the upstart new-classical style, a vibe that would once again sound off with jazz-orchestral energy when Bernstein provided underscore for another gang street classic called WEST SIDE STORY in 1960 – a work that WATERFRONT is most definitely a raw, angry precursor to – but with a gut punch impact far removed from the elegance of the 17t century maestros that provided Bernstein with his bread and butter.

It’s almost amazing to think that this landmark, Oscar-nominated score to a Best Picture winner has taken 60 years to come out. But Intrada has done a masterful job with one of the most important soundtracks they’ve ever released. The audio presentation is incredibly vibrant and brassy, betraying little of its audiophile age for a score from the way pre-digital era. Joe Sikoryak’s grittily black-and-white styled booklet design, classic score specialist Frank K. De Wald’s informative liner notes and album producer Douglas C. Fake’s tale of how the score was so splendidly presented today go to the mat to play Bernstein’s groundbreaking score in all of its pug-worthy glory that’s as impactful today as when Bernstein had Brando ran the union-bruising gauntlet decades ago.

Clink on the link to buy the ON THE WATERFRONT soundtrack

Click on the link to Purchase the ON THE WATERFRONT soundtrack

Article Source: Assignment X
Article:CD Review of  the ON THE WATERFRONT soundtrack