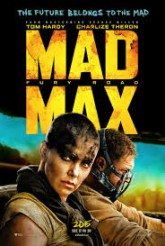 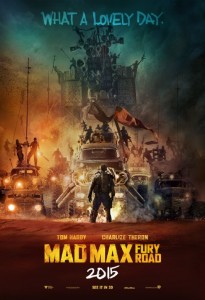 It’s been 30 years since Mad Max battled Tina Turner in BEYOND THUNDERDOME and boy is his presence (and action adrenaline) needed. With the state of action movies reliant more on CGI over practical filmmaking, everything has become artificial live action cartoons.

Thank goodness for director George Miller who returns to helm the fourth installment in his MAD MAX films – MAD MAX: FURY ROAD. And while the film does feature its share of CGI, most of it is used as enhancement. The majority of the film, which in essence is a two hour long action chase sequence, was done the old fashioned way – with practical explosions, car wrecks and stunts.

It makes for a visually arresting and damn near one of a kind experience.

Tom Hardy takes over the Road Warrior role of Max Rockatansky from Mel Gibson (now too old and too controversial to topline a $150 plus movie of this nature). While Hardy is missing Gibson’s screen presence and sense of humor, he’s still rock solid as Max. In the new incarnation, people are the commodity and Max is captured and turned into a human blood bag for an army of maniacs called War Boys run by their ominous leader King Immortan Joe (Hugh Keays-Byrne).

Things kick into gear when Imperator Furiosa (Charlize Theron) takes the Five Wives of King Joe (who are breeders for him) and wants to  set them free by taking them to a safe haven  at her home where she was taken from many years before. Of course King Joe won’t have this and it becomes an all-out chase with Max being dragged along for the ride.

The insane acrobatic nature of some of the stunts and set pieces truly lives up to the “Mad” in the film’s title. It’s sheer, unadulterated imagination and for a 70-year old director to be helming such a visceral masterpiece is all the more stunning. Where does he get the stamina?

Strangely, and has been pointed out by others, Max is actually the secondary character in this film. Furiosa is truly the lead here and ratchets up the film to a whole other level. Both Theron and Hardy do a great job with very little story – it’s all about their stoic emotions and what’s not said, versus long stretches of overwrought dialogue. It’s an interesting choice Miller chose, and some times it backfires because the film is so chock full of action, that when the characters do take a breather to chat, you long for it to immediately jump back to the action.

Anyone worried that Miller would not manage to live up to his previous MAX adventures, particularly THE ROAD WARRIOR, are seriously mistaken. It does and then some.

MAD MAX: FURY ROAD is a breath of fresh air – a film that could only be made by Miller, his way. The fact that the studio trusted him so much and allowed him to create such filmic anarchy with his action set pieces is a miracle. It’s a rare commodity today, but that’s why MAD MAX: FURY ROAD will likely stand alone as the most original and exhilarating films of the summer, if not the entire year.