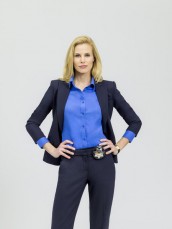 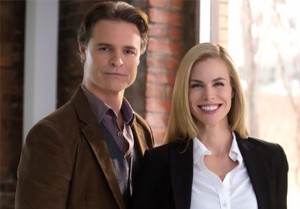 In Hallmark Movies & Mysteries Channel’s GOURMET DETECTIVE, the first in a series of nine telefilms with these characters premiering Saturday, May 16 at 9 PM, Brooke Burns plays San Francisco police detective Maggie Price. Maggie is a single mom who accepts help with a food-oriented murder from culinary consultant Henry Ross, played by Dylan Neal.

Texas native Burns is also still the host of Game Show Network’s THE CHASE, where Mark Labbett, nicknamed the Beast, does his best to stump contestants with multiple choice questions. Burns was a regular on the 1998-2001 incarnation of BAYWATCH, NORTH SHORE, MISS GUIDED and PEPPER DENNIS. Burns talks about THE CHASE, GOURMET DETECTIVE – and an instance where she did some real-life sleuthing of her own.

BROOKE BURNS: [In] the Hallmark Movies & Mysteries Channel’s GOURMET DETECTIVE, Dylan Neal is my costar. He also wrote it with his wife, Becky Southwell, and is executive-producing it, and we just did the first one up in Victoria, B.C. I play a very strong-willed detective for the San Francisco P.D. and he plays the romantic foodie. So it’s very fun, because we have a bit of a love/hate relationship and I’m kind of the more serious, badass one and he’s a little bit more of the “Enjoy life,” and romanticizes things, and I get to give him a hard time.

ASSIGNMENT X: So actually, you’re the detective and he’s the gourmet and there isn’t one combined Gourmet Detective?

BURNS: Well, technically, Dylan plays the Gourmet Detective, but he calls himself a detective, but I think that’s a little “ish,” if you know what I mean, because I’m a real detective and being a gourmet detective doesn’t really count.

AX: Did you do any research into the San Francisco Police Department for this?

AX: Do you enjoy hosting THE CHASE?

BURNS: I love it.

AX: Do you learn anything while you’re hosting it?

BURNS: Oh, my gosh, yes, so much. One of the things that I love about the show is that we don’t have categories that you can pick from. It’s really a little bit about everything, which is why sometimes we can even trip up Beastie. Not often, because he has a photographic memory – unfortunately for some of our contestants, but fortunately for the show. He’s wonderful and I love working with him. I’ve always been a genuinely curious person and I love going to work every day and learning something new, some random trivia facts. Sometimes they’re silly, sometimes they’re historical, sometimes they’re just stuff that you would never dream up in a million years – why do we have this question and how do you the answer to that? [laughs].

AX: Do you think you might ever be a contestant on a very special episode of THE CHASE?

BURNS: Oh, my Lord, I hope not, because I would do terrible under the pressure of not only Beastie, but the audience and the lights and the camera and the time. My husband and I always talk about it at home. I’m like, “Oh, my gosh, I’ve been thinking about it, we all knew the answer, but we’re like, ‘Um …’” And he went, “Nnnn! Too much time!” [laughs] It’s so stressful.

AX: Before you were ever cast in GOURMET DETECTIVE, it sounds like you did some real-life detective work tracking down your dog.

BURNS: It was a couple of years ago, maybe more than that now, because my daughter Maddie was quite young, I think she was six or seven years old. We had a little black Maltepoo, Max, who had a Mohawk and a microchip, thank God, because Maddie took his collar off of him because she thought he was uncomfortable in it and wanted him to just be cozy for the night, and unfortunately, the painters that had been in the house left the gate open, Max got out, he was on the front lawn and a couple in their forties picked him up because they thought he was a stray. That was not true, because first of all, they never took him in [to the vet] with the microchip. They picked him up because he was adorable and I had to have a little reconnaissance happen, but we put up pictures, and my vet is right up the street and we had an elderly man who was about eighty years old come in and say, “My neighbor’s got a dog just like that this week,” and I said, “What?” And so we did a little more research and I called them up and said, “Please do the right thing and return my puppy, my daughter is depressed out of her mind.” So they brought him back and I found the chip so that I could prove that he was ours. It was definitely over a week when he finally came back. In fact, [during that week] we got another puppy, so now we have two Maltepoos, Lena and Max. So now he has a loving sister, although I think he came home and was like, “Who’s this chick in my house?” [laughs]

AX: Anything else you’d like to say about GOURMET DETECTIVE?

BURNS: I just hope that people really enjoy watching it. Dylan and I have great chemistry on the show, which I think is key to something like this really working, and if you were ever a fan of MURDER SHE WROTE, Angela Lansbury, which I was growing up, then you’ll like this show.

This interview was conducted during Crown Media’s party for the Hallmark networks and the Television Critics Association.