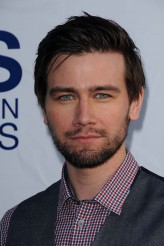 The actor loves his fans and they love him! 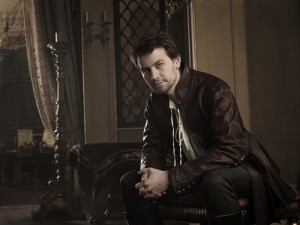 Sitting down with Torrance Coombs, who portrays Sebastian, the bastard son of King Henry II (Alan Van Sprang) on the hit CW show REIGN during the First CBS Summer Press Day Party at The London Hotel Rooftop Pool was perfect timing as the first season of REIGN just finished on May 15th with the episode “Slaughter of Innocence.”

Here’s our conversation with Coombs as he talks about Season 1 and the forthcoming Season 2.

ASSIGNMENT X: Now that the season just finished, it’s was an interesting turn of events…King Henry is dead…you’re now married to Kenna (Caitlin Stasey), but it does seem that you still are in love with Mary (Adelaide Kane)…what are your feelings on this?

TORRANCE COOMBS: I know what you are saying. It is hard to get over somebody like Mary. The number one thing right now in Bash’s life is his brother and I think there is a lot of remorse that he tarnished his relationship with his brother Francis (Toby Regbo). He did it though to save his life.

AX: Is he still on the show? The season ended with him riding out of the castle to go to the girl Lola (Anna Popplewell) that was having his baby even though the Black Plague was killing people.

COOMBS: Oh he is back!

AX: So the Black Plague doesn’t get him?

COOMBS: We’ll see about that. I couldn’t tell you that. All I can tell you is that he was told to come back with the rest of us and shoot some more! (Laughs) It hasn’t been written yet, so we don’t know, they are writing it now. They don’t tell us anything.

AX: Do you think that it will end up that you will land up being the Prince eventually?

COOMBS: The interesting thing now is that Bash was in Court because his father allowed him to be. Now that the King is dead it is up to Francis to allow him to be, because Queen Catherine (Megan Follows) is not going to want him around, as he is a threat to Francis’ rule. But really it is going to be that Francis is going to have to lean on him heavily I think. That’s my thoughts on it.

AX: You were suppose to move out of the castle …

COOMBS: That’s right I was banished from the castle and I was leaving the country and my father dragged me back and married me to his mistress! (Laugh)

AX: I was thinking that living in a time like that that the King could have whomever they wanted and you kind of think when he went mad that he had a sexual disease that made him that way.

COOMBS: So when someone who has absolute power and who is supposedly ordained by God goes crazy, what do you do about it?

AX: I mean living in a time like that.

COOMBS: He was known for having outbursts. It’s not necessarily historically that he was mad King Henry that we had on our show. 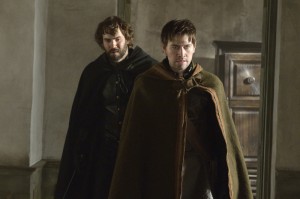 AX: What would you like to see for your character this year? Will you and Kenna eventually have kids?

COOMBS: What’s interesting now we got this kind of adopted kid Pascal (Lucius Hoyos) who may or may not still hold a grudge against me for A) killing his father and B) now killing his mentor, so we will see if there is a fall out from that point going forward.

AX: His mentor is…

COOMBS: The Darkness. Even though the Darkness is a bad dude I think he understands that, but I still killed his dad and I killed the Darkness who had taken him under his wing and so I don’t know how he is going to respond to me going forward and we have to do something with him.

AX: There have been a lot of characters that have come and gone on the show. You almost got killed?

COOMBS: Yeah, pretty early on. I read that script and almost had a little heart attack! Already!

AX: I was reading an article on you that you stated most of the roles that you get have been where you have to talk with an English accent. How many roles have you had that you had to that?

AX: Is it hard for you to do the English accent?

COOMBS: This is the toughest show for me because I have so much to say. The other shows where I don’t have that much to say I’m more the strong silent type. This one is changeling because it’s wordy at times… you get this big wall of text which is full of tongue twisters and it is 40 below outside and my mouth freezes and I can’t form the words.

AX: It is really doing well. I’m sure you have a big fan following.

COOMBS: Yeah, we really noticed it on social media. When REIGN started I had 7,000 followers and now I have, I think, 85,000 so that is how it has grown in under a year.

AX: Do you get recognized now when you are out?

COOMBS: Yep, mostly I have to go to the danger areas; you know what I mean, if I go to shopping malls and airports. Shopping malls especially where there are likely to be younger girls shopping that is where it happens. Nobody has bothered me eating dinner. You see when people notice you, but they are mostly respectful and it’s a point of interest…oh it’s that guy. People are nervous when they come up and so sweet and they are worried they are ruining my day. But they are so respectful and nice…it’s cute!

COOMBS: I do like it. I like that people care. I’ve been working in TV for eight years now and this is the most anybody has cared about anything that I’ve done, so that is a nice feeling.

AX: I’m very happy that the show has worked out. CW really stands behind their shows.

COOMBS: I really do appreciate that about them. They do not often have a show that they shoot and cancel three episodes in. They wait and see how it is going to do.

REIGN will return in the fall on Thursday nights following THE VAMPIRE DIARIES.