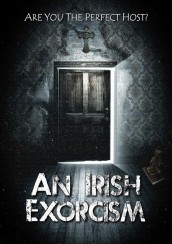 The found-footage genre, that friend to every filmmaker who has a tale (and some who don’t) but no budget, ranges from the sublime to the idiotic. AN IRISH EXORCISM doesn’t break any ground – apart from perhaps being, as is claimed in the behind-the-scenes featurette, the only serious exorcism movie made so far in Ireland – but it’s a mostly good small-scale horror film.

Writer Martin Robinson and director Eric Courtney cannily start with a majority of characters who are skeptical but drawn into the situation for various reasons, and one believer who doesn’t want to talk. This allows for humor at the outset and gives everyone breathing room in terms of changing opinions and alliances.

Film student Lorraine (Aislinn Ni Uallachain) wants to do a project on exorcisms, noting that although the Catholic Church doesn’t talk about it much, there are thousands of requests every year for such services, with two thousand performed last year in the U.S.A. alone. Lorraine’s boyfriend Cathal (Dillon White) thinks the subject is pure superstition, but agrees to serve as her camera operator. Parish priest Father Quinn (Paddy C. Courtney), who doesn’t want to state a firm point of view one way or another on the subject, arranges for Lorraine to have a quick interview with prickly Father Byrne (Brian Fortune). Byrne won’t sit for long, but Lorraine and Cathal are still in the building when Maura (Elaine Hearty) comes in for her appointment. It seems that Maura has come to Byrne and Quinn as a last resort regarding her young daughter Lisa (Anna Davis), and she’s much more open to speaking for the camera than the clergymen are.

Lorraine is a fairly well-drawn character, given to a bit of showboating for her documentary, so when she becomes fearful and genuine, it’s effective. Uallachain gives Lorraine a pleasing blend of self-awareness and moxie, so that we can simultaneously admire her tenacity and deplore her pushiness. AN IRISH EXORCISM does suffer from the problem that plagues many found-footage films, which is that it beggars belief that the person holding the camera doesn’t just flee at a certain point. This is especially annoying here, as it’s established that the camera can simply be set down and keep running, but it serves to ramp up the tension.

The acting is solid across the board, with well-modulated performances. The Irish town, countryside and the manor house where most of the action takes place provides a novel backdrop (at least, for viewers who don’t live in Ireland) and, because the story takes place largely in one place, we don’t feel that we’re stuck here because of financial constraints.

The filmmakers definitely take a less-is-more approach when it comes to showing the horror, which works much of the time but has moments of less-is-less when we’d really like to see just what is drawing such extreme reactions from the characters.

Still, AN IRISH EXORCISM is creepy and well-made, with a touch of exoticism as a bonus.