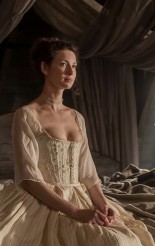 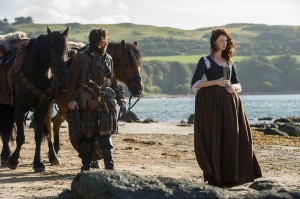 Starz’s OUTLANDER, Saturdays at 9 PM, is now in the midst of its overwhelmingly popular first season and renewed for a second. The series tells the story of Claire Beauchamp Randall (Caitriona Balfe), a married WWII British Army nurse who finds herself transported to the Highlands of 1700s Scotland, where she meets, has to marry and eventually falls in love with Jamie Fraser (Sam Heughan), a local laird with his own castle – and major troubles with British officer Jack Randall (Tobias Menzies), the sadistic ancestor of Claire’s twentieth-century spouse Frank (also Menzies).

Diana Gabaldon, who wrote the best-selling series of books on which OUTLANDER is based (the first book shares the show’s title), takes some time to discuss both her work and the television adaptation.

GABALDON: Claire was carving something out of wood, and she’s not a naturally gifted whittler, so she’s having trouble with it and Jamie, who is very good at it, says, “What the heck are you doing? Here, let me do that for you,” and she says, “No, I don’t think you want to,” and he says, “Why wouldn’t I? It looks really simple,” and she says, “Well, it is, but it’s a [medical device] for old Grandma Wilson, who’s had eight children and her insides are kind of falling out,” and he says, “What do you do with it?” I wasn’t expecting that at all [laughs].

AX: The television adaptation of OUTLANDER is fairly faithful, but are there bits in the show where you go, “That’s a surprising way of depicting that?”

AX: What did you think of Jack Randall’s monologue about flogging, a speech that was not in the book?

GABALDON: Well, when I read it in script form, I was sort of thinking, this seems really melodramatic and I’m not sure he would say that, but things change, and you can’t tell from the script how it will work in action. And Tobias is such a good actor, in his hands, it’s just fabulous.

AX: Are there things in the show that they’ve added or subtracted that you’ve thought were good, bad or indifferent?

GABALDON: Not very often. Every once in awhile. Mostly, I can see why they did it and I don’t say anything. Occasionally, I’ll say, “You know, I did it the way I did it because of this, and if you do it the way you’re doing it, that doesn’t work any more, so you might want to bear that in mind,” and sometimes they change it, sometimes they don’t.

AX: And are there scenes in the TV version that are exactly as you envisioned?

GABALDON: Oh, yes. Many of them.

AX: Can you name a favorite?

GABALDON: [laughs] That would probably be the spanking scene, which they took directly out of the book, and they handled it exactly as it is in the book. I was very impressed with that, because it took a lot of work on everyone’s part to make that work.

AX: Do you like the way they’ve turned your sex prose scenes into sex TV scenes?

GABALDON: Yes. I think they do a very good job of it. They do use a lot of the original dialogue, and a good sex scene, as I was telling someone earlier today, is a scene that could only have happened between these two people. What it is, is a dialogue scene with physical cues. A bad sex scene, you can have any two people doing it and it’s just physical action – therefore it has no impact. But if it has [good] dialogue, these are lines that can only have been spoken by this particular person to this particular other person, and that makes it unique.

AX: Do you get to go up to Scotland to visit the set?

GABALDON: Now and then. They invited my husband and I to come to the set for ten days and we got to see everything, attend production meetings, and they invited me to do a cameo [in a festive scene at Castle Leoch], so I was an actor for two days and that was a lot of fun.

AX: Have they said, “Well, we’ve seen you here, so we can’t see you there,” or are you allowed to pop up more?

GABALDON: I haven’t any idea. That’s kind of up to them. If they say, “Hey, do you want to do another cameo,” I probably would, but it’s their call.

AX: Are you working on any books or series outside of OUTLANDER?

GABALDON: Oh, yeah, I always have little projects here and there. I’m doing a couple of novellas about different things, different minor characters whose stories I’m filling in. I have a contemporary crime novel that’s sort of been simmering on the back burner and may simmer for quite a while longer, but definitely it is there.

GABALDON: People pick up the book and they say, “Well, what kind of book is this, what’s it about?” Finally, I gave up and said, “Look, open it anywhere, read three pages. If you can put it down again, I’ll pay you a dollar.” I’ve never lost any money on that bet.