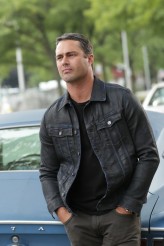 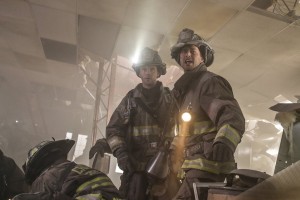 NBC’s CHICAGO FIRE, now in its third season Tuesdays at 10 PM and renewed for a fourth, is a hotbed of so much action and drama that it’s already birthed one spin-off, CHICAGO P.D., and is now the launching pad for next season’s CHICAGO MED.

Taylor Kinney, who plays CHICAGO FIRE’s heroic firefighter Kelly Severide, talks with us about doing crossover episodes, as well as how he feels about Shay’s death, one of this season’s most jaw-dropping stunts and more on the Dick Wolf-produced series.

AX: When you do the crossover episodes, do you feel like you are on a different show, or does it all feel like it’s of a piece, because you’re still playing Severide?

TAYLOR KINNEY: I would say the only difference is the stages and the crew. Because we work hand in hand so much with all those other actors that it becomes familiar. So it does kind of feel like the same show.

AX: At this point, before they tell you there’s going to be a crossover, when you start reading the script, do you have a crossover alert that goes off in your head?

KINNEY: [laughs] No. You get a sense for a storyline, so if there’s a storyline that would pertain to one show or the other, if Jon Seda’s character [Antonio Dawson], Jason Beghe’s character [Hank Voight] are on our show, we know that it could potentially cross over and we could be doing something on P.D.

AX: Earlier this season, you had a spectacular helicopter crash on CHICAGO FIRE. How was that done, practically on set or with CGI?

KINNEY: That was a number of days. We had a lot of technical support and a lot of riggers that helped us out with that. That took awhile, but I really enjoyed doing that, really enjoyed working on that, and I remember there was one day we were on top and there was a news outlet there, it was EXTRA or something, and I was doing a stunt jumping out of the helicopter that was tipping on a gymbal, and the first thing, I run out and I jump right into the camera on this techno-crane and bust some of the crane, and it was just one of those [laughs] – like I jumped into the camera. So the end result is great, but bumps and bruises along the way.

AX: How far up was the gymbal?

AX: They’re having you make jumps out of things at fifty feet up in the air?

KINNEY: No, it was on the roof, and then we did inserts on stage, but we put the actual fuselage of the helicopter on the top of the building. It was out onto the roof deck. So I wasn’t in danger, it was just the camera that was in danger.

AX: Do you enjoy doing the stunts?

KINNEY: I live for them. I love that. I love the juxtaposition of going from one extreme to the other. I love telling stories in [fire chief] Boden’s [played by Eamonn Walker] office set, that’s something that’s like a character study. So we go in and I’ll meet up with Eamonn, we’ll rehearse and we’ll go over stuff, we’ll come up with a bunch of different ideas and a bunch of different ways to play it, and then I get just as excited to do that as I do when I have to walk shoulder to shoulder through a fire with Jesse [Spencer, who plays firefighter Matthew Casey].

AX: Earlier this season, Severide’s good friend Leslie Shay, played by Lauren German, was killed. When you found out that Shay was going to die, did you think, “This is a really good opportunity to get into some new emotions,” or did you think, “Oh, no, she’s going”?

KINNEY: I was upset. And certainly it opened up a storyline, but she’s missed.

AX: Do you know what went into that storyline decision?

KINNEY: I can’t speak for that, because I don’t know. I’m not the creators of the show and that’s not my job. All I can do is speak for her talent and working with her and say that I miss her. I miss the character and I miss [her]. We’re good friends in real life. She’s a genuine friend and a great actor and some of it is missed.

AX: How has it been playing the grief?

KINNEY: It’s a bummer. [laughs] I was going to say, it’s like grief. You’re grief-stricken. The idea is to tap into an emotion, right? So you don’t want to act it, and you miss your friend. So no acting required, really.

AX: Do you watch CHICAGO FIRE weekly as it airs?

KINNEY: Yeah, I do. It helps, because I like to try different things, and so it helps you when you watch to see where they’re going. Because in the edit, you can try one thing with the character, and especially when we started ou, you don’t know what takes they’re going to use or what they’re going to use, and [that affects] the characters. Say we have an interaction and one take is really out there and frivolous and another take is grounded and serious. Depending on the edit, it changes the dynamic of the interaction. So I think it helps. In a film, you can’t do that [change the performance in future episodes based on the final cuts of past ones]. I may miss an episode occasionally, but I’m on social media. Fans like to Tweet along and I like it also.

KINNEY: I can’t say one thing. Nothing specific. But just the range. There are certain things that I look at, certain shows that I look at, and any time you get a chance to do anything past one season – this is the first time I’ve done a show into a second season. That’s been a highlight of my career. It’s amazing and I’m eternally grateful. But I can do stunts, I can rappel down a roof, I can go through fire, I can get up and do the gear and do the physicality and handle that, and then I can go in and do emotional scenes with great actors. I just like the idea of the transitions and just the opportunity to do different things. I would hate to be locked into a character where it was a suit and tie sitting behind a desk every day. Because there are those shows, and I’m not knocking them. That’s what I love about CHICAGO FIRE is, we shoot on location everywhere throughout the city. I’ve gotten to learn the city of Chicago through shooting on location. So whether it’s the South Side in rough neighborhoods or uptown in hoity-toity neighborhoods with the rich folks, I’ve gotten to see Chicago through the eyes of a firefighter.

KINNEY: I’d like people to watch it. We have a great fan base, we have great storylines, great characters, and I feel like it’s a show about everybody. I have a hard time believing there’s anyone out there who doesn’t watch the show who can’t empathize with at least one character. You’ll find someone – you’ll find a Hermann [played by Robyn Coffin], you’ll find a Mouch [played by Christian Stolte], you’ll find an Otis [played by Yuri Sardarov], a Cruz [played by Joe Minoso], a Casey, a Severide. You’ll see something that says, “Hey, I can relate to that.” I feel like at the end of the day our goal is to tell relatable stories with characters that you want to engage with.