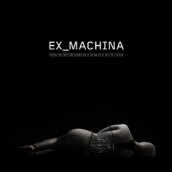 28 DAYS LATER and SUNSHINE writer Alex Garland makes a gradually impressive directing debut in front of the lens with this beautifully appointed, but at-first sterile adult sci-fi picture that gradually builds to end on a memorable high note. And it’s exactly the film’s overwhelming, creepy blankness that co-composers Geoff Barrow and Ben Salisbury are effectively playing to. It’s an interesting, and impressive dynamic, with Barrow essentially making his scoring debut here after writing tunes that have appeared in such films as TANK GIRL, THE CRAFT and LORD OF WAR, while Salisbury is the more seasoned component with his copious work heard in such nature documentaries as OCEAN GIANTS and LIFE IN COLD BLOOD. That is what seemingly comprises the circuitry of the femme bot that a hapless computer geek is sent to explore, a process of emotional discovery that starts off with hypnotic, unfeeling ambience.

As with Hans Zimmer’s way more active pro-mechanoid score CHAPPIE, Barrow and Salisbury use gentle bell percussion to play the child-like aspect of the forbiddingly sensual “Ava,” a war more attractive Pinocchio figure who wants to be a real woman in every way possible. Yet this is pretty much a haunted house score, as bizarre, bubbling electronic effects gradually intrude amidst the minimal atmospheres to tell us that something very wrong is afoot, if purposefully hidden behind the closed doors of icily appealing sound masses. It’s a throbbing, thematic ambience, with a flight into guitar rhythm, that recalls the more surreal work that composer John Murphy gave to Garland’s rage zombies and burnt madman, as stripped and slowed down to completely hypnotic effect. This is pure, state of the art computer music with a bit of a taste for buzzing retro synthesis, capable of both fear and religious transcendence, much like the film’s erotic test subject. EX MACHINA a musical Tabula Rasa if you will that asks the listener to invest feeling into the music instead of it giving away deliberate emotion the other way around. And much like a computer dork who may be as big a sap as any detective who fell for the wrong dame, Barrow and Salisbury’s EX-MACHINA completely sucks the adventurous listener in to its high tech, and at times alarming, seduction.

Click on the link to Purchase the EX MACHINA soundtrack