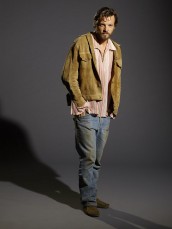 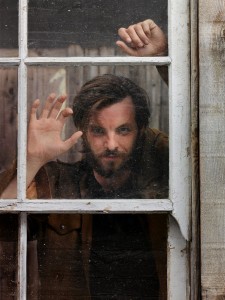 NBC’s AQUARIUS, premiering Thursday May 28 at 9 PM, is a work of historical fiction from series creator John McNamara. Set in Los Angeles in the ‘60s, it follows homicide detective Sam Hodiak, played by David Duchovny, as he looks into the disappearance of a young woman whose fate is entwined with a then-obscure aspiring musician named Charles Manson, played by Gethin Anthony.

Anthony, who hails from England, is most famous internationally for playing the ill-fated Renly Baratheon on the first two seasons of GAME OF THRONES. He has also starred in the feature films COPENHAGEN and WE ARE MONSTERS.

ASSIGNMENT X: As you are way too young to have been around during and immediately after the Manson murders, trials and fallout, and you’re from England, how aware were you of Charles Manson as a historical figure before you got involved in AQUARIUS?

GETHIN ANTHONY: I was absolutely aware of him. It’s hard to put myself in that place [of less knowledge] now, having done all the work and research, but I guess guys my age – I’ve bumped into a lot of friends from high school and things like that who say, “Oh, I did a book report on him when I was fourteen or fifteen.” I seem to remember watching documentaries around twelve or fifteen years ago. I don’t know why at that time they were on TV, but I knew about him as the most famous person involved with serial killings and I probably knew similar to the man on the street, but now I know a bit more. Actually, some of the strongest reactions I’ve had are from people round about my mum’s generation, and that’s because they lived through it. And that’s not just through my mum and family, but actually over here [in the U.S.], when I just meet friends and acquaintances. People of my own age or friends, it’s just more an excitement, because they know how infamous the crimes were and the man himself. So yeah, I sort of got an understanding from my mother about what she knew about it. I bumped into some people from Poland who seemed to know more about it than I did when I first got the job, so he certainly has a worldwide infamy.

AX: Is there pressure involved in playing such an infamous person who’s still living?

ANTHONY: I don’t know about pressure, but it certainly presented a challenge. I really am excited by roles where you can delve into lots of source material, and by playing any real person, it’s a tradeoff between imitation and honoring the material that you’re actually telling at the time. So there was a challenge in that. I listened to [recordings of Manson’s] voice over and over again. The sound guys on our set were probably bored of hearing me go through the same speech over and over again, because it was a useful tool to click in and out of the dialect, things like that.

AX: Did you have any concerns about playing Manson, in terms of the danger of making him too sympathetic?

ANTHONY: I understand that, and yes, there were concerns about even the idea of bringing him into any kind of story, especially historical fiction. What I trusted and knew how authentic the script was in telling its own story, and how much I trusted [creator/executive producer] John McNamara and [executive producer] Marty Adelstein – the support they gave me throughout the process, which was ongoing throughout, really made me understand what we were trying to achieve, and I think we’ve done what we’ve done in a way that we can be proud of.

AX: As an actor, do you have to find something sympathetic within the character in order to play him?

ANTHONY: I think the things that people do define them, and whether those are positive actions or evil actions that have a negative effect on other people, that’s what defines people. And in being part of crimes or vile acts of inhumanity then yes, you can characterize someone as being inhumane. As an actor, you have to connect with them as a human being. And that is a different challenge. And what I did do was try to read as much as I could about him before he was even anywhere near the age that we’re playing him in the show. What were his experiences as a child, as a young adult, and how might those experiences lead to someone committing actions later on in their life?

AX: In addition to being homicidal, Manson is also majorly racist. He was trying to start a race war. Do you have to say things that make you think, “It’s true to the character, but I hate putting this out in the universe”?

ANTHONY: Specific phrases, no, not yet, but it is a really interesting part of his character, that he had a rhetoric of peace and love and acceptance, which was diametrically at odds with the actions he committed. So that is one of the more fascinating things about the drama. As far as specific phrases, because of the kind of show that we’re making and the kind of audience we hope will be able to watch the show, basically, there was nothing gratuitous, if that makes sense, that stood out. But yeah, there were certain extreme actions that I had to do. 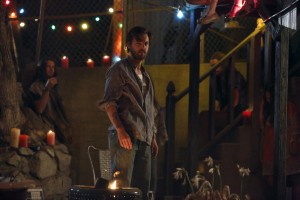 AX: On a lighter note, did you already know how to sing and play guitar for the scenes that required those skills?

ANTHONY: Let me put it this way – I sang when I younger, so singing I’m familiar with. I think the first thing I did when I got the job offer was go and find a guitar and start learning pretty fast. I think I still have a bit of a steep learning curve with music and I had a wonderful team around me to make sure that what you see on the show reflects what the story needs. I play guitar on the show and I sing on the show, but also there’s a great music team behind me to make sure it all sounds right.

AX: Are you excited to be working with David Duchovny – that is, were you an X-FILES fan?

AX: If AQUARIUS goes for more seasons, will it encompass the Tate/LaBianca murders?

ANTHONY: Well, let me put it this way – it’s a historical fiction, but our history starts two years before those particular incidents took place. As far as going [more] years, then yes, whilst we’re not saying when or how or if we will include those particular things, because we want it to be a bit of a surprise, yeah, we’re looking to go beyond that.

AX: Is this your first American network TV show?

ANTHONY: Yes, it is.

ANTHONY: I’ve been a really fortunate actor [laughs]. Back home, I’ve had the privilege of working with some great professionals. I knew coming into it, with a show that is being backed by NBC, the professionalism on set, the fact that you’re working in a town that lives and breathes the industry, the crew guys are the best you can ever hope to work with – in that sense, it matched my expectations. On GAME OF THRONES, I had a little bit of an experience with that, but obviously, I got less time on set, so I was exposed to it a little less, but it’s a joy, and I’m really – I feel really lucky that we are being courageous to tell such a challenging story.

AX: Did GAME OF THRONES factor into you getting the role in AQUARIUS? Did you audition for this role, or was it an offer?

ANTHONY:  [laughs] Oh, gosh, you still audition, yes. I think GAME OF THRONES, for all of us, it’s been an incredible privilege to be part of a show that captures people’s attention because, necessarily, if more people see your work, they might be interested in seeing you play other things and things like that, so yeah, absolutely, I’m very grateful for GAME OF THRONES and all the opportunities it’s brought me.

ANTHONY: [laughs] That is a really, really good question. I think it would be hard to come off of GAME OF THRONES or leave Westeros without completely concluding that it’s a very dangerous environment and my character in that show was perhaps ill-prepared for that, which is why he wasn’t there for very long. I think Westeros wins on which is more dangerous than our world, thank goodness.

AX: Do you still watch GAME OF THRONES?

AX: Who are you rooting for to be king?

ANTHONY: Oh, gosh. We [the GAME OF THRONES actors] talk about this a lot – we think [there should be] some kind of general counsel of Arya and Bran and then Brienne could be an older protector for them, rather than just one monarch.

AX: What would you most like people to know about AQUARIUS right now?

ANTHONY: I watched the first episode and I just couldn’t wait to watch the second one. It’s a really exciting, provocative show about Los Angeles in one of the most interesting periods of recent U.S. history. It takes in so much – the civil rights movement, the student movement, young people, like the birth of “the teenager” [as a social category]  – it touches on so many things. And at the center of it, you’ve got David Duchovny playing what I think will be another iconic TV character and he’s an anchor for the show, and it’s exciting to be involved with it.

This interview was conducted at NBC’s spring press event at Pasadena’s Langham-Huntington Hotel.