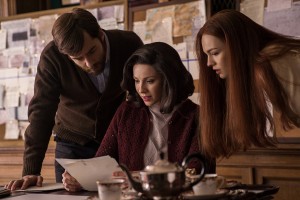 The adult Roger entered OUTLANDER at the end of Season 2. English couple Claire Randall (Caitriona Balfe) and her husband Frank (Tobias Menzies) met the orphaned boy as a child during their fateful ‘40s trip to Scotland, when Claire accidentally traveled 200 years into the past. It is there that she and Jamie meet and fall in love.

At the end of Season 2, Claire has returned to the present. Then, in the ‘60s, she and her grown daughter Brianna (Sophie Skelton) travel to Scotland, where Rankin’s now-adult Roger meets them.

In Season 3 of OUTLANDER, Sundays on Starz, Roger starts to fall for Brianna as both of them try to help Claire return to Jamie’s era.

Rankin (who changed his surname from Harris to avoid any confusion with the late Irish actor Richard Harris) has TV credits that include BURNISTOUN, THE CRIMSON FIELD, AMERICAN ODYSSEY, THE SYNDICATE, FROM DARKNESS and THE LAST KINGDOM.  He talks about his history with OUTLANDER, which goes back further than his tenure as Roger.

ASSIGNMENT X: Were you familiar with OUTLANDER when you got this job, or did you get the job offer or the audition and then read up on it?

RICHARD RANKIN: It happened in two parts. Obviously, I’m from Scotland, and when OUTLANDER came to Scotland, it had such a profound impact on the film and television industry in Scotland, a very beneficial impact, it had such a profound impact on the Scottish film and TV industry, it was great for us. It created a lot of work for our film and TV crews, and also, there was a real hike in the awareness of Scottish tourism. So when it came to Scotland, yeah, I was very much aware of it, but it wasn’t for some time after that that I was cast, so I had an opportunity in between to start reading up on it, becoming more aware of the show, watching the show. So by the time I started, I was very familiar with the world of OUTLANDER.

AX: Before you were cast as Roger, had you gone up for any other OUTLANDER roles?

AX: By the time the role of adult Roger came around, or did you still have to come in and test, or did they feel like, “Oh, we know this guy already”?

AX: Since you were cast as a man of the twentieth century rather than the eighteenth century, do you feel there’s something more contemporary about you than the other actors?

RANKIN: Well, I don’t think that can possibly apply to Roger, because he can’t be too contemporary. He has kind of a modern shell, I suppose, because he’s in the ‘60s, but what’s very important about Roger is, you have that sense of his lineage, and his connection to the eighteenth century, and his bloodline back to [Jamie’s kin] the MacKenzies. He’s the descendant of Geillis Duncan [played by Lotte Verbeek] and the war chief [Dougal] MacKenzie, who was played by Graham McTavish. It’s important to me that there’s a sense of that, so I need to keep an idea that you feel that direct connection to them, because that story explodes down the line as we move forward.

AX: It’s the 1960s when we meet Roger as an adult. How much did you know about that era?

RANKIN: I think everyone has some awareness of the ‘60s. It was such, I suppose, a prominent part of history, especially if you were born in the ‘80s. People were still going on about how liberal and free the sexes were, the Swinging ‘60s. Also, I did my research, as any actor will do research on the time period that they’re going to be representing, the culture, the music, the political scene, so yeah, obviously, I researched that and had an idea of that.

AX: Do you think Roger feels more at home in the ‘60s, or if he ever travels to the past, do you think he might feel at home there?

AX: Do you have a preference for the scenes where you’re being romantic, contentious or introspective?

RANKIN: They all set the scene, they all build the characters. The thing is, with [OUTLANDER novel series author] Diana [Gabaldon]’s writing and the amazing writers that we have on the show, the characters are so complex, they’re so richly drawn, that you’re always telling a story. There’s always so much context and you’re always playing a huge amount of subtext to your character, there’s a million things going on. So I like all aspects of playing Roger, and following the story.

RANKIN: Not at the moment, no. OUTLANDER’s going to be [the focus] for a wee while, I think.

RANKIN: That it’s going to be the best season yet.

This interview was conducted during Starz’s portion of the Summer 2017 Television Critics Association (TCA) press tour.
Related: OUTLANDER: Exclusive interview with actress Sophie Skelton on Season 3 and DAY OF THE DEAD: BLOODLINE