The star talks about the new Stephen King's tale 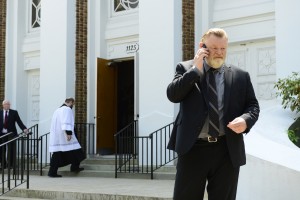 In AT&T Audience Network’s MR MERCEDES, which has its first-season finale Wednesday, October 11 (and was just renewed for Season 2 today), Brendan Gleeson plays retired homicide detective Bill Hodges. Based on the novel by Stephen King, MR MERCEDES follows Bill’s dogged pursuit of the title character (Harry Treadaway), who used a stolen car to commit mass murder and is intending to kill even more people.

Gleeson, who hails from Dublin, Ireland, has been working steadily in film, television and theatre for decades. He’s gained three Golden Globe nominations – for playing an idiosyncratic Irish cop in THE GUARD, a likewise unusual hit man in IN BRUGES and Winston Churchill in INTO THE STORM. He previously worked with MR MERCEDES series creator/executive producer David E. Kelley on LAKE PLACID, playing a small-town American sheriff. Audiences of all ages know Gleeson as Mad-Eye Moody in the HARRY POTTER films.

At a Q&A session for MR MERCEDES, Gleeson notes that unlike many people, he did not discover King through his original works. “I came from a different place. I was more into the movies. I wasn’t a reader of Stephen King over the years. I’ve found that in the last thirty years, practically all of my reading has been project-related anyway. The movies is where I found my Stephen King, really. I’m not particularly interested in the supernatural as a place of terror. What led me to this was David Kelley and then having read the actual script, and then going to the books. So I went to it the other way. But as Jack [Bender, one of MR MERCEDES’ executive producers and its primary director] said, what’s amazing about this is that this is about the beast within. All the characters have the horror within. They’re all haunted, but haunted in a very human way. And I find it riveting to take something with Stephen’s amazing richness and the abundance and variety of characters that he’s able to bring into the world and find a common thread, and then the plot that he’s able to put into place, and then taking David Kelley’s human touches. The exploration is endless.”

Although Bill is American in King’s novel, in the MR MERCEDES series, Bill is a transplant from Ireland, and Gleeson uses his real-life speaking voice as the character. When the session is over, Gleeson takes time to discuss this.

ASSIGNMENT X: Did you have a discussion about whether or not Bill should be Irish? Because obviously you can do a perfectly convincing American accent …

GLEESON: Yeah, I did. It was decided quite late on. I always thought of him as an American Everyman, and I realized when I came over [from Ireland to the U.S. to make MR MERCEDES] then that, of course, many American Everymen have grown up in different countries. So it was interesting just to remove a particular barrier, particularly with the character’s childhood, that I didn’t have to remember softball matches I hadn’t seen. And it was an interesting choice. In the end, I was glad, but I had always intended to keep him American, and then somebody said it would be one less layer, and I thought maybe that’s more important, that there’s one less layer to access, because it’s pretty basic stuff. 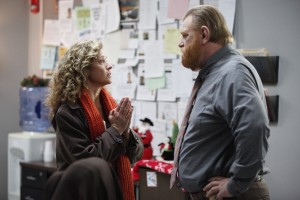 AX: What makes Bill different from all of the other people you’ve played? What’s his unique quality for you?

GLEESON: His unique quality? I don’t think he has any unique qualities other than his particular jumble of all the things that we all have. I mean, he has a kind of a frantic need to straighten things out, except when it comes to himself. And I think partly the last thing he wants to do is straighten himself out [laughs]. But it’s just his particular jumble of faith and desperation – I mean, when it comes down to it, we all look the same, really – we all are the same underneath to a certain point. And then we become utterly unique, each and every one of us. And I’m not sure if I can put my finger on exactly what makes him unique, other than the jumble is particularly his own.