The actress talks about her new Audience Network series 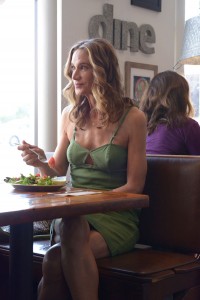 MR. MERCEDES, airing Wednesday nights, is Audience Network’s ten-episode adaptation of the Stephen King best seller, the first in a trilogy. The story concerns the hunt by a retired Chicago police detective, portrayed by Brendan Gleeson, to track down the man who used the title vehicle to commit mass murder at a job fair. Kelly Lynch plays Deborah Hartsfield, who doesn’t realize that her son Brady (Harry Treadaway) is the killer. Then again, there are a lot of things that Deborah doesn’t know, as she’s in an alcohol-induced haze most of the time, for reasons that gradually become clear.

Lynch, on the other hand, seems acutely aware of everything happening around her. The actress, originally from Minneapolis, has a career that includes the iconic ‘80s films COCKTAIL, ROAD HOUSE, and DRUGSTORE COWBOY, and more recent TV series like the reboot of 90210, THE L WORD and MAGIC CITY. As Lynch talks, she reveals that she has a surprising connection to the subject matter of MR. MERCEDES.

ASSIGNMENT X: Had you read the MR. MERCEDES novel? Were you a Stephen King fan before this?

KELLY LYNCH: Yes, and yes. I am an enormous Stephen King fan. I’ve read everything, pretty much. I’ve missed a couple, but not many, including miniseries, movie versions, and I think he and I are on the same page. I love THE SHINING, the movie, but I really love the book. I thought the movie missed it. I thought it was beautiful visually and a Kubrick thing, but I thought [King’s novel] THE SHINING was subtle and terrifying, not so much the spooky spookhouse, but just more an internal, frightening [look at] a family spiral down in this creepy way. But yeah, number one, Deborah Hartsfield for me is one of those great characters ever.

AX: THE SHINING and MR. MERCEDES seem to deal with some of the same issues in terms of parental alcoholism and how it affects families …

LYNCH: And alienation, and being separated from the other, not feeling part of the world in the same way that people feel part of the world, or they don’t, feeling disenfranchised and trapped. Yeah, those are the themes. And cars are themes for [King]. I’m a victim of a crippling car accident, as he was. People are afraid to fly. I’m always happy to be in a plane, because the statistics are so great, but cars still scare the hell out of me.

AX: When was your accident?

LYNCH: 1980. I was twenty years old. A girl went the wrong way on a freeway and hit me head on, broke both of my femurs, and I was in the hospital for about a year, and I had to learn to walk again. They were, for a long, long time, seriously considering amputating both of my legs at the hip. So every day is a good day for me now [laughs].

LYNCH: My whole young life, I was an actor in my own mind, in my front yard, at family gatherings, all that stuff. And I sat there [in the hospital], and I said, “If I have my legs, and if I survive this, and I can walk again” – because none of these things were known things – “I want to be an actor. I’m going to give myself permission to be an actor, even though that’s not what my family wants me to do. It’s the only thing I want to do. That’s the calling I have.” So yeah. It made a big difference for me. Any turning lemons into lemonade, it was my mantra that got me through it.

AX: Do you think Deborah has any kind of a mantra at all at the point when we meet her?

LYNCH: The mantra is, “Is there another bottle of vodka in the freezer? Dear God, please have that bottle of vodka in the freezer.” Her mantra is keeping herself medicated, keeping that television on loud enough to drown out her thoughts, and keeping herself outside of the real world where she could be judged or judge herself, and see how far down the hole she’s fallen. And in their weird little world [of Deborah and Brady], at their sad house, their relationship has become very normal for the two of them. Their dysfunctional relationship works for them.

AX: Do you think she has any idea, even subconsciously, of probably not what Brady is actually doing, but what sort of person he is? Or is he just her baby?

LYNCH: Well, I think Deborah, if you really tried to pull it out of her, would be upset that he doesn’t have any real friends. She thinks he’s such a handsome and resourceful and intelligent young man, why doesn’t he have a girlfriend? Why don’t you bring friends home? Why are you always in the basement and not out in the world, doing fun things with kids? On the one hand, I like that he’s there for me, and on the other hand, I know that that’s not normal. I’ve never talked to Harry about this, but it seems like Brady might even be on the spectrum a little bit, where he’s so intelligent and so resourceful, but so not able to navigate relationships with people, not in what we would look like as an easy, normal way. But I think she just feels that he’s such a good kid, and he works two jobs to take care of them. He’s my everything, but I know that he’s unhappy.

AX: I know what happens to Jerry, Deborah’s other child, in the novel. At least in what’s shown in the flashbacks in the first four episodes, it does not look like Deborah is as complicit as she is in the book …

LYNCH: It’s funny. Harry wanted it just to be that thing, where they give each other the look and then this thing happens with Jerry. And I felt like it’s almost bad enough for a mother to be so inattentive that [Jerry is injured in the first place]. That seems to me to be almost the same as murder in a way. It’s a form of manslaughter, a form of dysfunction. As a parent, it’s about on the top of the list for me. But we decided to keep it a little bit less clear.

AX: Because you normally play very smart, very physical people, were you looking to play someone like Deborah, who is neither of those things?

LYNCH: Always. I’ve always looked to play someone [like Deborah]. I hated reading notes from Audience [Network] which say, “She’s just a really bad person,” which is what TV networks do to make it real black and white. I never thought I was playing a bad person. I thought I was playing a complete human being with this particular story. And any time I can add more than one color and not have to be “the pretty girl,” I’m really happy about that. I’m a dork and a nerd who was this tall [Lynch is 5’9”] when I was in third grade. I knew that the pieces were maybe going to come together, because they did for a couple of other people in my family, but who I really am and who I appear to be to people are two completely different things.

AX: And what would you most like people to know about MR. MERCEDES?

LYNCH: That it’s about the characters. The ride is amazing, but it’s about these people, and it’s a really good allegory for the time that we’re living in right now, for how disenfranchised a lot of people feel right now. They feel like they’re off the grid. Everybody is broken in this show, except for maybe Jharrel Jerome’s character [the detective’s young tech-savvy friend Jerome]. And Holland Taylor[‘s character Ida] as well. She’s a lonely person, but she’s got her act together. The rest of us are broken people.

This interview was conducted during Audience Network’s portion of the Summer 2017 Television Critics Association (TCA) press tour at the Beverly Hilton Hotel.