Game of Thrones Review Season 7 The Spoils of War recap

Delivering on the promise of a holy !!!! battle 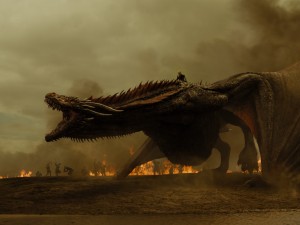 The GAME OF THRONES Season 7 episode “The Spoils of War” shows up what happens when the forces of Cersei Lannister (Lena Headey) and Daenerys Targaryen (Emilia Clarke) clash. The results aren’t pretty, but they are spectacular, even by GAME OF THRONES standards. The short version of what happens is, never underestimate a Dothraki horde, and really never underestimate a dragon.

As for the longer version of events in “The Spoils of War,” in King’s Landing, banker Tycho (Mark Gatiss) is very impressed that the Iron Crown, in the person of Cersei Lannister (Lena Headey), will be able to pay its debts to the Bank of Braavos in full so quickly. After taking Highgarden, the Lannister army has plenty of gold. Tycho says the bank will be happy to invest with Cersei, just as soon as the gold shows up.

The gold is presently in the hands of Jaime (Nicolaj Coster-Waldau) and his troops. Bronn (Jerome Flynn), who is one of Jaime’s officers, is griping about the fact that he was promised a castle and doesn’t have one yet, although he does have a large sack full of gold. Jaime promises Bronn he’ll have his pick of castles once the war is over. Bronn thinks Jaime is crazy for imagining that peace will prevail if Cersei wins. We are inclined to agree with Bronn. Jaime and the Lannisters have also acquired a great deal of grain, which means their side will eat and the other side will likely starve.

At Winterfell, Baelish (Aiden Gillen) tries to find favor with Bran (Isaac Hempstead Wright) by giving him a valuable dagger of Valyrian steel that once belonged to Tyrion (Peter Dinklage). Someone (not Tyrion, though he’s been blamed for it) tried to use the dagger to kill Bran way back when. Bran alarms Baelish by quoting him, saying “Chaos is a ladder,” something Baelish uttered back in Season 3.

Meera Reed (Ellie Kendrick) comes to say goodbye to Bran. She is extremely hurt that Bran seems to have no reaction to the news that she’s heading home to her people. Bran explains that he’s not really Bran any more. Meera says that Bran died back in the cave, and she’s right in a way – between the guilt of what he did to Hodor and the flood of memories that come with being the Three-Eyed Raven, Bran is no longer the person he was.

Then Arya (Maisie Williams) arrives at Winterfell. She’s able to get past two not terribly effective gate guards, who don’t believe she’s really a Stark. Informed of her sister’s arrival, Sansa (Sophie Turner) finds Arya down in the family crypt. Despite their long-ago childhood differences, the two Stark women are genuinely happy to see one another. Without going into great detail, both acknowledge they’ve been through bad times. Arya tells Sansa about her list of people she wants to kill. When Sansa takes Arya to see brother Bran, he’s still human enough to hug her. Bran mentions Arya’s list as well – Arya is surprised he knows about it. Sansa explains that Bran has visions. Bran gives Arya the dagger Baelish gave him, since she’s got more use for it than he does.

Arya encounters Brienne (Gwendoline Christie) in the courtyard. Although Arya ditched Brienne back when, she now admires the knight. After all, Brienne bested the Hound. Arya wants Brienne to train her, though it’s more like Arya wants a worthy sparring partner, since she’s pretty accomplished with a sword already. It’s a scene that passes the Bechdel Test (two women talking about something other than a man) in action rather than words, and Williams and Christie both look fabulously skillful executing the moves.

At Dragonstone, Jon takes Daenerys to the caves beneath Dragonstone. Not only is there a wealth of dragonglass, there are cave paintings made by the Children of the Forest, showing the Children and the First Men working together against a common enemy. Daenerys is impressed, though annoyed that Jon still won’t swear fealty to her. Davos (Liam Cunningham) is impressed with Missandei’s (Nathalie Emmanuel) loyalty to Daenerys (Emilia Clarke). Missandei makes a good case that Daenerys’ many followers love and respect their queen because she freed them, rather than fear her or are reflexively supportive because she’s the daughter of a king.

Tyrion and Varys (Conleth Hill) have bad news for Daenerys – they’ve lost the Iron Islands, Highgarden and the Reach. Daenerys is furious and blames Tyrion for his bad advice. She is inclined to take her dragons and burn down the Red Keep. She asks Jon for his counsel. Jon, after he gets over his surprise, thinks it over and says that Daenerys has shown the people something new, a ruler with compassion and principles. But if she embarks on a campaign of vengeance and destruction, she’ll just be the same old power that has always ruled.

Theon Greyjoy (Alfie Allen) arrives on the beach at Dragonstone with some men from the Iron Islands. Jon Snow (Kit Harington) is disgusted with Theon, letting him live only because Theon helped Sansa escape the Boltons. Theon wants to ask Daenerys’ help in rescuing his sister from Cersei, but Daenerys has left Dragonstone. So where is she?

Back at the Reach, Jaime is talking to Sam’s more physically adept brother Dickon Tarly (Tom Hopper). Dickon regrets killing the Tyrell soldiers – the Tarlys were pledged to the Tyrells, and he knew a lot of the men he fought against. Jaime is sympathetic, but says that the Tyrells rebelled against their rightful queen.

And then Jaime and Bronn hear the thunder of approaching hoofbeats, well before they see the charging Dothraki horde, not to mention Daenerys flying above them on the gigantic dragon Drogon. Here’s something we haven’t seen before – Drogon setting fire to whole columns of men with his breath while battle is raging all around. It is fiery, it is brutal, it is wild.

The Dothraki have the advantage of surprise, of better horsemanship (some of them jump up in their saddles to shoot arrows at their foes while their steeds continue to race forward) and of conviction. As has been pointed out repeatedly, the Dothraki believe in Daenerys, whereas the Lannister soldiers simply fear Cersei. Also, the Dothraki have the great morale booster of Daenerys right there with them, on her super-weapon. Frankly, having a dragon fight on your side gives the impression of righteousness.

Bronn is able to make his way to the anti-dragon harpoon Qyburn constructed for Cersei. He gets off a couple of shots and actually hits Drogon in the chest. Drogon is knocked off-course, but still lands rightside-up without dropping Daenerys.

Tyrion, watching the battle from a nearby ridge, is horrified to see his brother Jaime charging at Daenerys. He loves both of them and doesn’t want either one to die, though it’s pretty clear that Jaime is going to get burned alive by the irate Drogon. “Flee, you fool,” Tyrion murmurs. Jaime can’t hear him and wouldn’t heed him if he could. At the last second, Bronn knocks Jaime off his horse and both men go tumbling into the waters of the Reach. Jaime’s armor is pulling him down into the depths, and it’s unclear if he can survive, and …

“The Spoils of War” is quite an episode, from the delights of the Arya/Brienne sparring match to the horrifying ferocity of the battle to the range of emotions we experience watching it. Unlike “The Battle of the Bastards,” where we not only wanted Jon to win but wanted Ramsay Bolton to be beaten as decisively as possible, here our loyalties are torn. We love Daenerys, and certainly don’t want her to lose Drogon, but we’ve grown to love Jaime and Bronn, too, and we feel for those poor soldiers caught up in the awful mess of it all. It’s an incredibly well-staged sequence that is also emotionally harrowing. The spectacle serves the emotion, and that’s just as it should be.