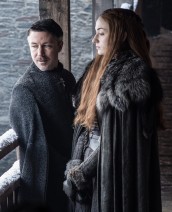 © 2017 HBO
A scene from GAME OF THRONES Dragonstone
Reviews

A fine start to the season refreshes and furthers the tale 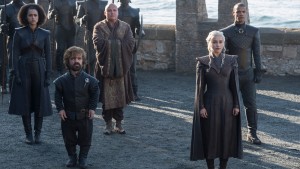 Arya Stark (Maisie Williams), disguised as Walder Frey (David Bradley) – don’t forget, she’s a Faceless Woman now – poisons the entirety of House Frey, at least all those who had anything to do with killing her mother, brother and sister-in-law at the Red Wedding. Her capacity for vengeance is impressive. She leaves a few female witnesses alive (who couldn’t possibly have had anything to do with the massacre), telling them if anyone asks that “The North remembers. Tell them Winter came for House Frey.” So Arya’s got style, too. And joy in her heart, if her smile is anything to go by.

Bran (Isaac Hempstead-Wright) and Meera (Ellie Kendrick) arrive at Castle Black. Bran has just had a vision of the Night King and his armies on the move.

At Winterfell, Jon Snow (Kit Harington) holds a council meeting that includes the Night’s Watch, Wildlings, Sansa Stark (Sophie Turner), young Lyanna Mormont (Bella Ramsey), Davos (Liam Cunningham) and pretty much everybody else with a say in what happens in the North. Tormund Giantsbane (Kristofer Hivju), speaking for the Wildlings, agrees that his people will man the walls for the Night’s Watch. When there’s some dispute over whether or not females should fight, Lyanna puts a stop to that quickly; she’s going to fight and nobody can tell her not to do so.

Jon and Sansa get into a public argument over whether the castles belonging to the families of traitors should be allowed to stay in the hands of those families (Jon’s opinion) or given to loyal houses (Sansa’s stance). Jon puts his foot down. Sansa is not pleased. Petyr Baelish (Aiden Gillen) is happy to see the rift between the ostensible siblings. We now know that Jon isn’t Sansa’s half-brother, but rather the son of Lyanna Stark and Rhaegar Targaryen, but Bran is the only character with this information.

Privately, Jon and Sansa continue to argue. Jon feels undermined; Sansa feels that Jon is being foolish. A message from Queen Cersei (Lena Headey), delivered by raven, demands that Jon go to King’s Landing and bend the knee or be branded a traitor. This starts a new argument – Jon isn’t worried about a southern army, while Sansa worries that Cersei will find a way to murder Jon as she has everyone else who has crossed her. Sansa admits she’s learned a great deal from her time with Cersei. Hmm …

Alone together, Cersei and her twin brother/lover Jaime (Nicolaj Coster-Waldau) talk strategy over a map of the Seven Kingdoms that covers an entire floor. Jaime points out that they haven’t got any allies. Cersei doesn’t care. She also doesn’t seem to care about their young son Tommen’s suicide, which she terms a betrayal. Jaime appears nonplused. He says that Daenerys and her fleet are likely to come ashore at Dragonstone, an ancestral Targaryen castle. Meanwhile, Cersei has made a pact with Euron Greyjoy (Pilou Asbaek), who actually would like the Iron Throne for himself, but will settle for murdering his niece Yara (Gemma Whelan) and nephew Theon (Alfie Allen), who have thrown in with Daenerys.

Euron shows up with the Iron Islands’ fleet of ships. He’d like to marry Cersei, which obviously doesn’t sit well with Jaime. Cersei declines the proposal, telling Euron he’s untrustworthy, even without all the fighting that’s gone on between the Lannisters and the Iron Islanders. Jaime has killed a lot of Euron’s kin, but Euron doesn’t mind, having murdered his own brother. Euron promises to return with a priceless gift. At a guess, he’s hoping to capture or kill Cersei’s hated other brother Tyrion (Peter Dinklage).

In the Citadel, Sam (John Bradley) is working as a largely nauseated intern at the Great Library. Besides shelving, he’s charged with cleaning chamber pots for the ailing Maesters, leading to a surprisingly long and disgusting sequence showing the miseries of his job. Sam also helps out on an autopsy conducted by Grandmaester Ebrose (Jim Broadbent) – by now, he and we are considerably less revolted than we might otherwise be, given what’s come before – and asks to be able to read the restricted books about the White Walkers. The Grand Maester actually believes Sam has seen White Walkers, but he also believes that the Citadel is apart from the rest of the world; it is the repository of human memory. He doesn’t think the Walkers pose the threat that Sam is sure they do; too many times, people have thought the End was coming. Sam finally swipes the Maester’s keys and lets himself into the restricted section.

At Winterfell, Brienne (Gwendoline Christie) is trying to train Podrick (Daniel Portman) how to fight with a sword and is exasperated by Tormund’s attempts to flirt with her. Sansa doesn’t really know how to deal with Baelish’s interest, so she ends a conversation with him quickly.

Arya encounters a group of friendly soldiers (one of them played by musician Ed Sheeran), who offer her food, drink, and news of King’s Landing. According to them, it’s the worst place in the world (with Cersei in charge, this is easy to believe).

Sandor Clegane (Rory McCann), traveling with Beric Dondarrion (Richard Dormer) and followers of the Red God, finds a house where he previously robbed the inhabitants after accepting their hospitality. The man and girl who lived there are both dead, the father apparently having killed the daughter then himself rather than having them both die of starvation. Clegane obviously doesn’t tell anybody about this, but he is deeply uncomfortable.

Clegane wants to know why Dondarrion, who seems otherwise unexpectional, keeps getting brought back to life by the Red God each time he dies (Clegane killed Dondarrion once, so he’s sure of the phenomenon). Dondarrion doesn’t know, except that his god does seem to want him alive. Clegane thinks if the Red God is so all-powerful, he ought to tell Dondarrion what he wants (fair point). Then one of Dondarrion’s men asks Clegane to look into the hearth fire. Clegane is surprised to have a vision: of the place where the Wall meets the sea, with an army of the dead marching past. Later that night, Clegane buries the dead man and child. Dondarrion helps, realizing Clegane knew these people. Clegane cannot admit what he did, but tries to pray for the dead, saying, “You deserved better.”

Sam is awake in his room with Gilly (Hannah Murray) and baby Sam, wearily reading over the lore about the White Walkers, trying to find something of use. It turns out there’s a mountain of dragonglass – the one substance that can kill Walkers – lying underground in Castle Dragonstone. Sam hastily writes to Jon.

Now everybody will show up at Dragonstone, whether they want to run into each other or not. Well, now we have a good guess as to how Jon and Daenerys and Cersei are all going to wind up in the same place at more or less the same time.

While Sam is making his rounds, an arm covered with the deadly disease greyscale reaches out of a doorway. The arm’s owner, who we realize is Jorah Mormont (Iain Glen), asks if the Dragon Queen has arrived yet. Sam, startled, says he hasn’t heard anything.

Daenerys (Emilia Clarke), with Tyrion, Missendei (Nathalie Emmanuel), Grey Worm (Jacob Anderson), Varys (Conleth Hill) and a few guards in her immediate party, arrives at Castle Dragonstone. Her fleet is right behind her and her three dragons are flying overhead. It’s an emotional moment when Daenerys kneels to pick up a handful of the sands of home. Both the castle itself and the surround cliffs are amazing locations/feats of design, even by GAME OF THRONES standards.

Inside the castle, Daenerys and her companions find the Dragon Throne and a strategy room. Daenerys looks across the three-dimensional map at Tyrion and asks, “Shall we begin?”

Absolutely, we shall. “Dragonstone” is a fine resetting of the board, showing us how far the characters have come and where they are now in terms of both situation and geography. It’s particularly satisfying to see Arya come so completely into her own. We can but hope to explore the breathtaking Castle Dragonstone in greater detail. More than ever, Lyanna Mormont is a delightful character. And if we never have to watch poor Sam in his cleaning duties again, we can count ourselves blessed.