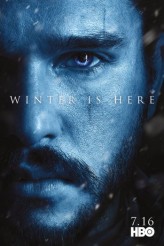 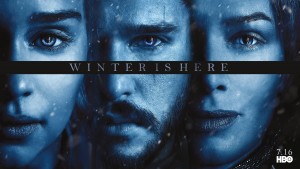 The GAME OF THRONES Season 7 episode “Stormborn” has major climactic action. However, it resembles the season opener, “Dragonstone,” in continuing to put pieces into position. Most of the main characters wax strategic, though “Stormborn” climaxes with an epic (literal) firefight on the water.

At Castle Dragonstone, Daenerys (Emilia Clarke) at long last calls Lord Varys (Conleth Hill) for selling her to the Dothrakis, trying to arrange her assassination way back when and general disloyalty to several kings. Varys counters that he doesn’t believe in blind loyalty; his loyalty is to the common people. Since Daenerys overall agrees with him and knows that Varys has actually served her well, she forgives him, with the caveat that, should he ever betray her, she’ll burn him alive. This seems reasonable to Varys.

Melisandre (Carice Van Houten) shows up and Daenerys receives her. Melisandre suggests that Daenerys send for Jon Snow (Kit Harington), the King in the North, to join forces. Tyrion, who remembers and likes Jon, writes a message and sends it by raven.

Daenerys confers with her allies: Yara Greyjoy (Gemma Whelan) of the Iron Islands, Ellaria Sand (Indira Varma) of Dorne and Lady Olenna Tyrell (Diana Rigg) of Highgarden. Ellaria is all for immediately having the dragons set fire to King’s Landing, but Daenerys quotes advice she earlier received from Tyrion (Peter Dinklage) – she doesn’t want to be ‘queen of ashes.” Tyrion explains that it will look better to the people to have Westeros armies laying siege to King’s Landing and starving out the army there, while the forces from Essos take out the real power, the Lannister stronghold Caesterly Rock. Since Tyrion is himself a Lannister, this seems good advice.

Even so, Olenna privately tells Daenerys that Tyrion is a clever man. Sheep follow clever men, but Daenerys isn’t a sheep, she’s a dragon.

Tyrion seems to be genuinely loyal to Daenerys, but Lady Olenna is a very sensible person. Hmm. And it’s tough to know with Melisandre, since she’s had some really awful ideas that have led her to do some awful things. On the other hand, it seems like it’s in everybody’s best interests for the Mother of Dragons and the King in the North to join forces.

At the Citadel, poor Sam (John Bradley) learns that their guest suffering from greyscale is Jorah Mormont (Iain Glen), son of Sam’s late mentor Jeor Mormont, who was Maester at Castle Black. Even though Jeor disowned Jorah, Sam is anxious to do the right thing by Jorah. When Archmaester Ebrose (Jim Broadbent) declares that it’s too dangerous to try to cure advanced greyscale, Sam goes ahead with the procedure he’s researched anyway. This involves cutting the greyscale off of Jorah’s body. Since the previous episode treated us to Sam emptying chamber pots and assisting with an autopsy, perhaps we and Sam are both meant to be inured to this kind of thing. It’s still direly gross (and very painful for poor Jorah). Sam, having learned that there’s a mountain of White Walker-killing dragonglass at Castle Dragonstone, sends a raven to Jon Snow with this information.

At Winterfell, Jon gets the raven from Tyrion. Sansa (Sophie Turner) knows Tyrion to be a kind man – she was married to him and he never put a hand on her – but she still thinks it’s a trap. Even young Lady Mormont (Bella Ramsey) thinks it’s a bad idea for Jon to go to meet Daenerys. Then Jon gets the letter about the dragonglass from Sam and makes up his mind. He makes an impassioned speech to the skeptical Northerners about how he didn’t want to be their king, but since they crowned him, he is going to do his best by them and that means trying to get powerful allies against the White Walkers. Sansa seems a bit mollified when Jon announces he’s leaving her in charge as Queen of the North in his absence.

Petyr Baelish (Aiden Gillen) follows Jon into the family crypt, where Jon is visiting his father’s grave. Actually, we now know that Ned Stark was really Jon’s uncle, but Jon is still unaware of his true parentage. Good thing for Baelish that Jon also doesn’t know for certain that Baelish was instrumental in Ned’s death. Jon still isn’t thrilled to see Baelish in the crypt, but he’s grudgingly grateful for Baelish bringing enough soldiers to turn the tide at last season’s Battle of the Bastards. At least, until Baelish mentions how much he loved Jon’s late stepmother Catelyn, and then goes on about how he loves Sansa in the same way. Jon slams Baelish into the crypt wall and threatens to kill Baelish if he touches Sansa. Given what a creepy jerk Baelish is being about the whole business, it’s easy to understand Jon’s reaction. It’s somewhat harder to understand why Baelish, the master tactician, wants Jon so riled up in the first place. Baelish want to drive a wedge between Sansa and Jon, but since he doesn’t have Sansa’s trust in the first place, this may not be the best way to go about it. Time will tell.

In King’s Landing, Cersei (Lena Headey) rallies those lords she still can command. She paints Daenerys as a monster, bent on destroying Westeros civilization. One of these lords is Randyll Tarly (James Faulkner), Sam’s unloving father. Jaime (Nicolaj Coster-Waldau) approaches Lord Tarly about taking a command position, but Tarly is loyal to Lady Olenna and it’s not clear what he’s going to do as he takes his leave.

Quasi-mad quasi-scientist Qyburn (Anton Lesser) takes Cersei down to the bowels of the castle, where there are huge dragon skulls. Qyburn shows Cersei a piece of anti-dragon artillery, a kind of mega-crossbow capable of puncturing a dragon’s eye and possibly its brain. Cersei is impressed. We’re worried.

On the road to King’s Landing, still planning to kill Cersei, Arya (Maisie Williams) encounters old friend Hot Pie (Ben Hawkey), who she knew when she was disguised as the boy Arry back when she was fleeing King’s Landing. Unlike practically everybody else in GAME OF THRONES, Hot Pie seems perfectly happy with how things have worked out for him. He’s the baker at an inn, good at his job, and not worried about who is fighting whom. He asks Arya if she’s heading back to Winterfell. Since Arya thinks the Boltons still have her old home, Hot Pie brings her up to date and tells her Jon Snow, her half-brother (really, her cousin, but she thinks he’s her half-brother), has beaten the Boltons, taken Winterfell back and is now King in the North. This gives Arya a lot to think about. When Arya is out in the woods, she is surrounded by a pack of wolves. This alarming situation becomes surreal when the direwolf leading the pack emerges from the trees. Arya realizes this is her old pet Nymeria, whom she freed in order to save the direwolf’s life back in Season 1. Nymeria won’t come with her, though, and Arya says, “That’s not you …”

Yara and brother Theon Greyjoy (Alfie Allen) are sailing with their fleet and Ellaria and her daughters to King’s Landing. Yara and Ellaria begin flirting and things start getting hot and heavy – and then their ship is rammed. It’s Yara’s homicidal uncle Euron (Pilou Asbaek) and his Ironborn men, setting fire to Yara’s fleet and boarding the flagship. After fierce fights, Euron kills two of Ellaria’s daughters, Obara (Keisha Castle-Hughes) and Nymeria (Jessica Henwick) – yes, the character has the same name as the direwolf. Euron’s men take Ellaria and her third daughter Tyene (Rosabell Laurenti Sellers), despite Ellaria’s request that the men kill them and just end it.

Euron gets Yara at knifepoint and taunts Theon. Theon, never the bravest soul at the best of times, has an attack of PTSD from all of the torture he experienced at the hands of Ramsay Bolton. Rather than trying to rescue Yara, he jumps overboard.

The action of this final sequence is remarkable. Director Mark Mylod gives it a mythic look, with black shadows and golden flames coloring the brutal life-and-death shipboard clash.

So Jon is heading for Daenerys, Arya is heading for Winterfell and Euron is heading to Cersei with gifts (Ellaria and Tyene) in hand. Has Sam succeeded in curing Jorah? Will Jon and Daenerys get along? Will we ever see Nymeria the direwolf again? Is Jaime ever going to strenuously object to the fact that his sister/lover is bonkers? We’ll have to stay in the GAME to find out.