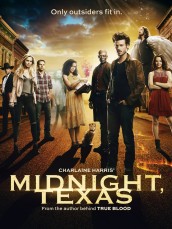 The actress talks about why she identifies with her character 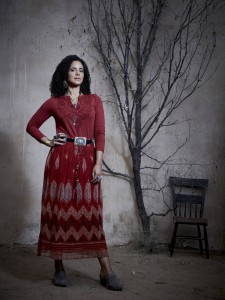 In NBC’s Monday night fantasy drama MIDNIGHT TEXAS, based on the series of novels by Charlaine Harris, we’re in a small town full of supernatural people who support one another. Parisa Fitz-Henley plays Fiji Cavanagh, the local witch.

Fitz-Henley can currently be seen in the Netflix series MARVEL’S JESSICA JONES and MARVEL’S LUKE CAGE as Cage’s much-lamented wife Reva, and is in the upcoming second season of Starz’s THE GIRLFRIEND EXPERIENCE. The actress looks very healthy, but says this wasn’t always the case. Fitz-Henley has been dealing with body image issues for much of her life, which called for teaching herself “on a cellular level” on how to deal with it. “I have been thirty pounds less than I am now and felt horrible.”

ASSIGNMENT X: Did you use any of that teaching yourself on a cellular level in your acting, for Fiji or any other character?

PARISA FITZ-HENLEY: I think so, but embodying a character, really taking them in and letting them live within me is really important to me. Especially with Fiji, this idea that she’s moving energy all the time. I could either wave my hands around, or I can be in the moment and try to feel what she’s feeling, so that’s what I do. I try to feel it.

For Fiji, being a witch, in a certain way, she sees herself as a scientist and a healer, and so she is able to tap into a really strong force that drives what she does, but it’s just who she is. In a lot of ways, she does feel very [normally] human and can see how other people can maybe be more super if they allowed themselves to be.

AX: You’ve spoken about Fiji’s desire to fit in. Can you relate anything about that to your own life?

FITZ-HENLEY: I can speak to that. I am biracial. I have one parent from the States, one parent from Jamaica. I grew up in a town where, if people knew you were from that town, you got made fun of and called names. Growing up with issues of race – this was in Florida – I always felt not quite right. I also felt like, as a woman, sometimes our gifts are not welcome in the world. And reading about Fiji, I was like, “Oh, my God. I so completely relate to her.” In the books, you’ll see she deals a lot with issues of her own perception of self and her body and how she moves in the world, and I so related to that as well. So all of these characters, I feel, bring that home to me, that feeling of, you are outside until you are with your people, and then you are all in, and I love that about it.

AX: Did you do any kind of research to play Fiji?

FITZ-HENLEY: I did. I read a lot, I visited with some of the pagan community in New Mexico and talked with them about some of the issues that they face, and in my own life, the things that are associated with witchcraft now – the things that used to be associated with witchcraft, like brews and the burning of certain herbs and stuff. That’s what we do now normally – burn your sage, drink an herbal tea. These things are normal now because we understand that it’s not crazy. And so there are many things that I think are from a witching tradition that are part of my regular life. 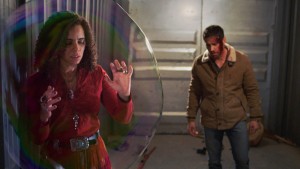 AX: And what would you most like people to know about MIDNIGHT TEXAS?

FITZ-HENLEY: I would like them to know that as much as there are monsters and dangers, there are battles, it’s a show about family, about the adventure of being with people who are different from you and making them your family.

This interview was conducted at NBC’s Summer Press Day in Pasadena, California.