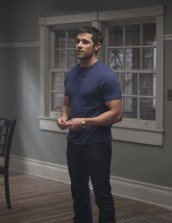 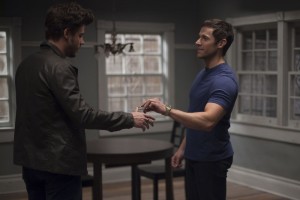 MIDNIGHT, TEXAS, which airs Monday nights on NBC, is based on a series of novels by Charlaine Harris (TRUE BLOOD) about a small town inhabited almost entirely by supernatural types. There’s a pastor who’s also a weretiger (Yul Vasquez), a vampire who ingests both blood and emotions (Peter Mensah), a tattoo artist who’s a fallen angel (Jason Lewis), a helpful witch (Paris Tirz-Henley), a freelance assassin (Arielle Kebbel) and a newly-arrived medium who talks to the dead (Francois Arnaud). Despite their differences, the townsfolk mostly get along.

Dylan Bruce’s character, pawnshop owner Bobo Winthrop, stands out because he’s apparently one of the few regular humans in town. Bruce has gotten to play someone with superpowers before – his corrupt cop Paul Dearing in HEROES REBORN had exceptional strength – but the actor also has previous experience playing a relatively ordinary guy in extraordinary circumstances. He was district attorney Adam Donner on several arcs in ARROW and was in three seasons of ORPHAN BLACK as military man Paul Dierden, who was romantically involved (at various times) with three of the clones portrayed by Emmy winner Tatiana Maslany.

Bruce, a native of Vancouver, Canada, talks about why there may be more to MIDNIGHT, TEXAS’ Bobo than there seems.

ASSIGNMENT X: When you saw what everyone else was doing in MIDNIGHT, TEXAS, did you think, “Rats, I’m on yet another show playing the one normal person”?

DYLAN BRUCE: No. I don’t think Paul was too normal [laughs].

BRUCE: Yeah. Thank goodness. I don’t know if I could have handled that workload [of playing multiple characters within a single scene] like Tatiana. This is normal, in a sense, but there’s a lot of stuff that Bobo’s dealing with.

AX: Can you elaborate on what’s going on with Bobo?

BRUCE: You know, it doesn’t really explain in the pilot what he’s dealing with. He has a fiancée that dies in the pilot, she’s murdered. He’s kind of a suspect, he gets arrested, and then the plot goes from there. But there are these bikers who are bad dudes. Bobo’s been on the run from a certain sect of the country for quite awhile, these people with certain beliefs, and for some reason, this woman that was his fiancée brings his past back to life, so he has to deal with some pretty crazy issues as the story progresses, issues that he doesn’t want his townsfolk and friends to find out.

AX: Why does he pick Midnight, Texas as the place to hang his hat?

BRUCE: The townsfolk, the camaraderie, there’s no prejudice in Midnight, we all love each other, and then the fact that people don’t really know a lot about Bobo’s past, and that comes back for sure.

AX: You’re in scenes in MIDNIGHT with a lot of special effects. Is that at all daunting, or are you feeling like, “I’m an old hand at dealing with this stuff”?

BRUCE: [laughs] I feel pretty good about it, yeah. I think my imagination has definitely gotten a lot of other work on some of the other supernatural shows I’ve been on, so I can definitely envision a flying angel.