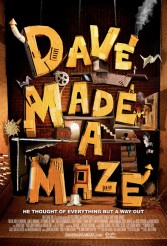 Movie Review: DAVE MADE A MAZE

Something truly different, though could be less self-referential 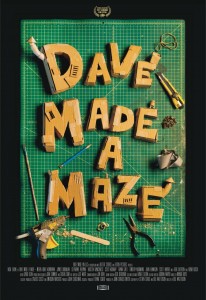 DAVE MADE A MAZE has the production aesthetics of PRIMER or CUBE, matched with the attitude of JOHN DIES AT THE END and perhaps STORY THEATRE. If you recognize these references, you are enough of an indie film/TV fan to be part of the target audience. It is trippy and artful, often amazing to look at, though writers Bill Watterson & Steven Sears, operating from Sears’ story, don’t want to work too hard at explaining things.

Watterson, who also directed, is not the creator of the CALVIN & HOBBES comic strip, so it must be a coincidence that DAVE MADE A MAZE has some CALVIN story logic to it, where things simply come to life. After a flash-forward that has Dave (Nick Thune) talking about some dire events and a charming animated sequence that shows that Dave is worried about his relationship unraveling, we meet Dave’s girlfriend Annie (Meera Rohit Kumbhani). Annie arrives home to find an enormous, unwieldy cardboard structure in the middle of the living room in the apartment she shares with Dave. Dave is inside the cardboard structure, which he says is a maze that is “bigger on the inside.” The film assumes that we’ll get the reference, but Annie doesn’t. Dave insists he’s lost inside the maze and that Annie mustn’t try to cut him out.

Annie finally calls Dave’s friend Gordon (Adam Busch), who calls a few other people. The upshot is that the apartment fills up with partiers. A fed-up Annie, a curious Gordon and a dogged documentary crew led by director Harry (James Urbaniak), with a cameraman (Scott Narver) and soundman (Frank Caeti) in tow, crawl into the entrance to the cardboard structure. Sure enough, it is much, much bigger on the inside, full of themed rooms – all made of cardboard – lethal booby traps and a Minotaur (John Hennigan), because it’s a labyrinth. Dave is also in here, but he doesn’t know how to get out. He wanted to create something, but now it’s grown beyond his control. So how do they get out?

There is something fabulously endearing about a movie where all but one of the sets are really made out of cardboard, and where paper and yarn serve as costumes, blood and even occasionally characters. DAVE MADE A MAZE has a genuine sense of childhood whimsy to it, though it is most definitely not for children. It is equally about play and about the creative process, that someone can will a magical, dangerous adventure into being through sheer force of imagination, without a whole lot of cash behind it.

However, there are a couple of places where DAVE MADE A MAZE loops back on itself. There’s no explanation of why Dave’s mind should have this kind of force (that can permanently impact certain other people) when it never did before and nobody else’s does. Ask most kids why things are happening the way they do in their games and they’ll be able to give you a basic answer (“I got my powers from this magical stone”), but we don’t get one here. Then there’s the mini-film crew following Dave et al around. James Urbaniak is great as always, but we get the analogy to filmmaking without this. This quickly becomes one of those self-references that’s more annoying than reflective. Finally, the movie doesn’t know how to give Annie her own arc. It literally admits this by having Harry try to interview the exasperated Annie on the subject, but it seems like in the time it takes to talk about it, they could have just given the appealing Kumbhani more to do and not need the conversation.

Thune makes Dave a quintessential floater who has been getting by on looks, crappy jobs and parental financing so far. Busch provides a lot of humor as Gordon wordlessly tries to process each new bit of insanity. Stephanie Allynne excels in a role that requires her to be alternately bland and creepy, and the cast is filled out with brief turns from Kristen Vangsness, Scott Krinsky and Rick Overton.

DAVE MADE A MAZE has its issues, but it should still be seen by anybody who wants to see a live-action movie for grownups do something new.