Home » Get Out Review 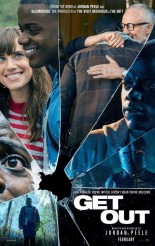 Movie Review: GET OUT 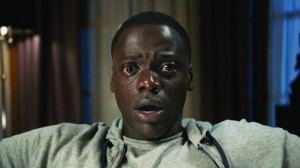 Director/writer Jordan Peele (of KEY & PEELE fame) describes his feature film debut GET OUT as horror, and we can take him at his word. GET OUT isn’t the type of horror we’re expecting from the set-up, but it gets there nonetheless, and it’s creepy throughout.

Chris (Daniel Kaluuya) is a successful photographer who agrees, with some reservations, to go for the weekend to meet his girlfriend Rose’s (Allison Williams) parents. This isn’t just the usual how-serious-is-this-relationship-getting jitters. Chris is black, Rose is white and she hasn’t mentioned Chris’ ethnicity to her folks. She assures him it won’t be a problem.

And at first, it seems like Rose is right. When Chris and Rose arrive at the enormous, isolated country house, dad Dean (Bradley Whitford) and mom Missy (Catherine Keener) come off as classic well-intentioned, try-too-hard liberals. Missy is a hypnotherapist who really wants to help Chris stop smoking. Only Rose’s brother Jeremy (Caleb Landry Jones) is aggressive. However, the household servants, Georgina (Betty Gabriel) and Walter (Marcus Henderson), both black, are distinctly odd. When Chris tries to talk to them, they become even odder. Then there is the annual party celebrating Dean’s late father, and things take a real turn.

GET OUT doesn’t turn into THE PURGE, which is where it looks like it may be headed for a little while.  Filmmaker Peele has a whole other sub-genre on his mind, one that will not be unfamiliar to horror fans. Once we get there, it seems like Peele didn’t want to have one of the white characters engage in a full-on verbal racist rant, which is fair enough, but we wind up sharing a question that Chris articulates that could have been illustrated more definitively.

If all of this sounds very vague, it’s hard to go into specifics without blowing plot twists. Peele is deft at both building tension and jump scares. He also has a healthy sense of humor that works with the mood rather than undercuts it.

Because of GET OUT’s underlying tone, even interactions that are simply awkward take on a sinister feel, and nobody needs to make a statement for us to understand how exhausting and demoralizing these interactions are for Chris.

Kaluuya easily commands our empathy as a decent, creative man trying to navigate a fraught situation with grace, and then reacting as pretty much anyone would in the circumstances. Williams comes across as the perfect girlfriend. Keener is calm and warm as the matriarch with a professional gift, Whitford is properly expansive, and Gabriel, Henderson and Lakeith Stanfield all keep us guessing as to what’s going on with their peculiar characters. LilRey Howery has just the right amount of bluster as Chris’ loyal friend Rod.

GET OUT comes from a point of view that isn’t often seen in major studio releases, certainly not in the horror genre. There are aspects that could stand better explanation within the plot, but it doesn’t seem compromised, and it makes us jump, sweat and cheer in all the right places.