Home » The Girl with All the Gifts Review 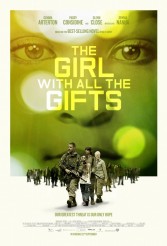 © 2017 Lionsgate
THE GIRL WITH ALL THE GIFTS
Reviews

Movie Review: THE GIRL WITH ALL THE GIFTS

A new, smart take on a subgenre 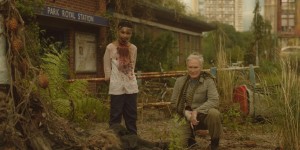 Don’t let the title, or the set-up, fool you. THE GIRL WITH ALL THE GIFTS may sound like either a poor-little-rich-offspring saga or the tale of a sensitive young woman dealing with personal issues as she navigates high school or college. It definitely is not.

THE GIRL WITH ALL THE GIFTS is actually set in mid-apocalyptic England, but despite the running “hungries,” this particular twist has never been done before. Writer Mike Carey (the author of the short story on which the film is based and the novel) and director Colm McCarthy seize onto the zombie genre and use it to ask questions about what it means to be human, what is valuable about society and who ought to decide, framing the issues in new ways.

Melanie (Sennia Nanua) is a delightful girl. She is smart, inquisitive, cheerful, polite and caring. She is also, for reasons we don’t understand at first, confined to a cell when she’s not expected to sit in a wheelchair, strap down her own legs, and then wait for armed soldiers to secure her wrists, put a restraint across her mouth and wheel her into a classroom.

We don’t have to see what’s outside to surmise that there’s a crisis in the world. We sense that Melanie is in danger before she does, as she’s so used to the routine that she at first cannot imagine something going seriously wrong. When it does, Melanie finds herself on the road with her adored and adoring teacher, psychologist Helen Justineau (Gemma Arterton), biologist Dr. Caroline Caldwell (Glenn Close), hard-nosed Army Sergeant Parks (Paddy Considine) and his fellow soldiers Kieran Gallagher (Fisayo Akenade) and Dillon (Anthony Welsh).

The world is changing in ways both expected and unexpected. Melanie and the adults all have to contend with Melanie’s nature, what it may mean and what each of them wants to do about it.

In some respects, THE GIRL WITH ALL THE GIFTS resembles 28 DAYS LATER, with non-undead but very dangerous altered humans running amok in both cities and the scenic English countryside. However, GIRL has crafted a very specific mythology that not only calls for some new visuals, but invites a level of character drama and existential inquiry that is new to the genre.

There are some apparent glitches, one of which is how Melanie developed into such a warm, bright person in her surroundings (despite Justineau’s affection, this child has been thoroughly institutionalized). It’s also unclear how correct one character is meant to be about a key belief (to describe this further would be to tip it). However, THE GIRL WITH ALL THE GIFTS is mostly very well-conceived, with Melanie’s special attributes unfolding in ways that are set up perfectly.

Despite not being top-billed, Nanua is the star of the film, and she is entirely winning. Arterton gives a heartfelt performance, Close is simultaneously thoughtful and steely. Considine, like the movie, displays a variety of layers, and Akenade is open and warm.

There is always something new that can be done with a good idea, and THE GIRL WITH ALL THE GIFTS proves this handily.

Article Source: Assignment X
Article: Movie Review: THE GIRL WITH ALL THE GIFTS