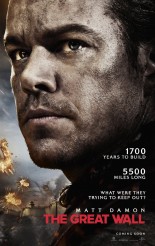 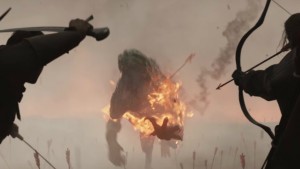 Despite its title (barriers aren’t known for their motion), THE GREAT WALL hurtles along at an impressive pace, usually slowing only so that characters can come up with strategy. Set in 12th-century China, THE GREAT WALL begins with a supertitle that explains the size and amount of time it took to build the Wall, then adds that this is one of the legends surrounding its origins (just in case anybody was liable to think anything along these lines actually happened).

As the film opens, after some fun use of distributor Universal’s spinning-planet logo, we zero in on desert plains in China, where five Europeans are riding hell for leather to outrun a group of mounted tribesmen. During the night, the men are attacked by a mysterious creature. William (Matt Damon) manages to cut off the thing’s leg and it falls to its death.

Only William and Tovar (Pedro Pascal) make it until dawn. Pursued again by the tribesmen, they run until their path is blocked by the Wall. They are promptly taken prisoner by the army there, called the Nameless Order. The soldiers don’t even have time to lock up the prisoners before the Wall is besieged by thousands of huge, voracious, lizard-like monsters known as the Tao Tei.

Fun fact: the Tao Tei are actually part of ancient Chinese mythology and images of the creatures can be found on Chinese currency. However, THE GREAT WALL adds its own spin on things, deciding the monsters have been attacking the Wall every sixty years for generations, which has given the Nameless Order a lot of time to figure out how to fight these things. Alas, it turns out that the Tao Tei have also had time to plan, so that the stakes rise considerably as the film progresses.

There are a couple of subplots, but the main thrust of the film is what the Nameless Order, and their surprised conscripts, can do to stop the Tao Tei. Director Zhang Yimou has come up with some fabulous visual ideas that are executed by phenomenal design and stunt departments. Each branch of the Nameless Order has its own color scheme, which makes for beautiful patterns when the various parts of the army interact with one another. Anybody interested in the possibilities of medieval Chinese weapons and fighting techniques should be enthralled with this aspect. The Tao Tei are likewise intricately conceived and wonderfully executed. Audience members given choice may want to watch in 2D rather than 3D, so as to better enjoy the gorgeous interplay of colors.

The main problem with THE GREAT WALL may not bother strict action fans. There isn’t a whole heck of a lot of either plot (there’s strategy, but that’s not the same thing) or character development. Damon’s William goes through the expected growth and Ting Jian’s Lin Mae, a key warrior in the Nameless Order, learns that not all outsiders are necessarily evil. Pascal is consistently entertaining as the pragmatic Tovar, but it would be a stretch to say he changes much.  Nobody’s trying to make a character study here, but a little idiosyncrasy would have gone a long way.

Still, THE GREAT WALL shows is things we haven’t seen, moves with speed and bristles with action. As these things go, it’s good if not especially thought-provoking.