Home » A Cure For Wellness review 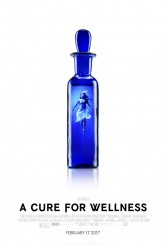 Movie Review: A CURE FOR WELLNESS 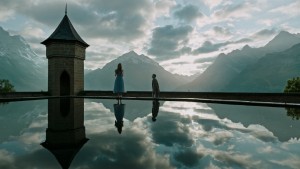 A CURE FOR WELLNESS plays like Roman Polanski and Terry Gilliam had a cinematic baby – which got kidnapped and reared by Roger Corman in the last third. WELLNESS goes from beautifully photographed, slow-burn suspense to a Gothic gonzonana finish. The spooky part is mostly a worthwhile experience (with a few caveats), but it has a jaw-dropping change of tone that obliterates the earlier mood.

Lockhart (Dane DeHaan) is a young New York stockbroker who makes a big leap up the corporate ladder when another member of the team is felled by a heart attack. It turns out the firm is in big trouble, and they need CEO Pembroke (Harry Groener) both to fend off a government investigation and to “take responsibility,” if need be. Pembroke, however, has sent a peculiar letter to the firm. He’s at a health spa in the Alps, and has no intention of returning to Wall Street. He writes of having seen “the truth.” Lockhart is sent to retrieve the wayward executive.

At first glance, the retreat is like any other enclave for the rich and unwell – men and women in white play croquet, exercise, get massages, eat good meals and drink lots of water, all in a beautiful location with an even more beautiful view. The castle-like clinic has been rebuilt on the grounds of an older structure with quite a history. Lockhart meets the director, Dr. Volmer (Jason Isaacs), who assures him that Pembroke is free to leave if he wishes to do so.

Something happens to delay their departure. Lockhart is warned that he is suffering from some of the same ailments plaguing the spa’s patients, but that the treatment may cause him to hallucinate. Lockhart starts to wonder what, if anything, is actually wrong with his fellow sufferers, who claim to feel great but appear to be having health issues.

Lockhart also meets a strange and very unworldly young woman, Hannah (Mia Goth), who apparently has spent her entire life in the facility.

The build-up is steady, artful and restrained. Director Gore Verbinski, who created the film’s story with its screenwriter, Justin Haythe, creates a steady sense of dread with slightly desaturated colors and the look of a hospital of bygone days, lurking within a picturesque old castle with truly stunning views. There’s even a creepy back story.

Then the back story morphs into – well, that would be telling, but if there’s a way to make the leap successfully so that the whole business can still be taken seriously, the filmmakers haven’t found it. There’s a sequence at the end that some will find offensive and others will find too ludicrous to generate anger.

One burning question that is raised in the minds of the audience is why Lockhart, who’s clearly going to be trouble, isn’t allowed to either just take Pembroke back to New York or quietly killed. There’s a reason given, but it doesn’t stand up in light of the rest of the structure.

We’re also meant to give weight to the changes in Lockhart as a person. DeHaan sells these and manages the tricky business of taking a character who starts out as a wholesale jerk and turning him into someone we want to see prevail. This, however, is because he has reasonable curiosity and humane instincts, not because he gains existential clarity.

Although it is flawed, in a way, A CURE FOR WELLNESS has something for almost everyone. Genre buffs and cinephiles will appreciate the art in the early and middle sections, and fans of completely bonkers movies will bask in the climax.