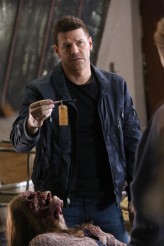 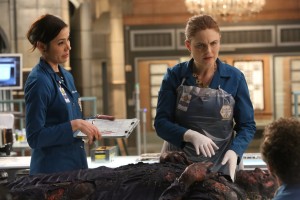 The BONES Season 11 finale episode “The Nightmare in the Nightmare” has a suitably menacing and slightly surreal quality in keeping with its title. With Brennan’s (Emily Deschanel) subconscious trying to point our favorite forensic anthropologist to the identity of a serial killer, it’s no wonder she’s having bad dreams.

Worse, the killer has left a corpse dressed in Brennan’s clothes (she donated them to a charity) as a calling card. Brennan and husband Booth (David Boreanaz, who also directed the episode) are both spooked. Brennan feels like she’s being watched and concludes she’s just being paranoid, but her father Max (Ryan O’Neal) is not so sure.

The murder victim made to look like Brennan is identified as a woman named Melissa. Melissa’s ex-husband says she was seeing a psychiatrist, Dr. Falk (Tim Guinee), to help combat her nightmares. After a few more terrifying dreams, Brennan decides that she needs help. Despite her skepticism about psychiatry as a science, she makes an appointment with Falk.

Booth and FBI partner Aubrey (John Boyd) check out a puppeteer who puts on a very disturbing Punch & Judy show. He’s not the killer, though. Then evidence points to Dr. Falk. Booth arrests him, even though Brennan thinks the doc was just trying to help.

While Brennan is alone in the lab, Cam (Tamara Taylor), Angela (Michaela Conlin), Hodgins (TJ Thyne) and lab assistant Wendell (Michael Grant Terry) get together at a restaurant. Since Brennan invited them via text, they think it’s odd she’s not there. When they call her at the lab, Brennan says she never sent the text. Alarmed, Cam calls Booth.

Brennan sees someone in the lab, but thinks she’s having another nightmare. Brennan dreamed of Wendell touching her with burnt hands, even though in real life, he has no such injury.

Having deduced that the serial killer may be a former lab assistant, Booth goes to the mental hospital where Zack Addy (Eric Milligan) is being held. Zack’s room is empty.

Brennan wakes up to find she is no longer in the lab – instead, she’s with Zack, who greets her with, “Dr. Brennan, it is good to see you again … We have so much to talk about.”

Well, holy bone saws, Batman. There was a hint we might be seeing Zack again, as Hodgins had mentioned him earlier. Years ago, Zack had confessed that he hadn’t really committed murder (the reason Zack has been in a mental institution) to the late Dr. Sweets, but Brennan apparently doesn’t know this, and who knows what evil may lurk in the heart and mind of a brilliant man wrongly imprisoned?

Then again, the other characters, and BONES itself, have always seemed very fond of Zack, who resembles Brennan in his single-mindedness. On the one hand, he’s got the concentration and IQ to pull off the Puppeteer’s crimes, but on the other hand, Zack has always seemed way too sweet and conscientious to go on a sadistic killing spree. For all the reasons he didn’t do it last time, he may not have done it this time.

In any event, director Boreanaz does a bang-up job of making Brennan’s nightmares disturbing, and the ending is suitably alarming. Good thing the series got renewed for a twelfth and final season, because it would be very sad if, after all these years, our last sight of Brennan was her being terrorized by an old friend.