Bones TV Review Season 11 The Fight in the Fixer

Okay episode with a mild dilemma for Brennan and Booth 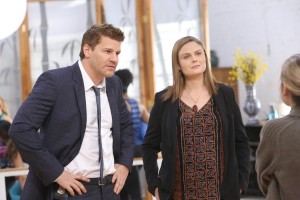 The BONES Season 11 episode has the usual mash-ups of primary mystery and secondary subplots, but the latter seem a tad half-hearted here. Perhaps the most enjoyable aspect of the episode is simply seeing Hodgins (TJ Thyne) returning to his old enthusiasm for lab experiments.

An experiment is called for when the Jeffersonian receives a body mostly encased in ice. Hodgins and Dr. Oliver Wells (Brian Klugman) use furnace-powered heat to de-ice the body, allowing for an examination.

The deceased is Frankie, a “fixer,” the type of high-priced private eye who comes up with frequently illegal solutions to embarrassing problems for well-heeled clients (a la RAY DONOVAN). Frankie had taken on a blackmail case for a tycoon caught on video doing some embarrassing things. It appeared that Frankie had been beaten up by the blackmailer, but in fact, Frankie had injured himself so that he could steal the $2 million ransom for the video. However, Frankie was murdered by his assistant Kerry (Alyssa Diaz), who was too cynical to believe her boss would really run away with her when it was all over.

This is all decent as far as it goes, though by the time Booth (David Boreanaz), Brennan (Emily Deschanel) and Aubrey (John Boyd) wind up running down all the leads, there’s not much time to have fun with the fixer aspect of the story. There’s a good sight gag with the blackmailer being covered in purple dye, but this doesn’t track well enough into the solution of the crime (or Frankie’s scheme) to make it integral.

In other news, it turns out that the fixer had dealings with Aubrey’s crooked financier father decades earlier. Not only has Aubrey previously been in Frankie’s office, which leads him to hidden files, but FBI files on Aubrey’s father shows that the estranged paterfamilias is back in D.C. This point is clearly to be continues.

Hodgins’ attempts to make up for his previous awful behavior by giving expensive jewelry to wife Angela (Michaela Conlin) make her uncomfortable. However, she manages to get him to go out supper with her, lab boss Cam (Tamara Taylor) and Aubrey. It’s good that Angela is getting Hodgins to return to the world, but at the same time, there is tension in the marriage. Angela’s confession to Cam that she is uncomfortable seems to be a place-holder for drama in upcoming episodes.

Finally, Brennan and Booth are exuberant over daughter Christine’s first report card, where she receives grades of E+ (i.e., excellent) throughout. But then Wells first criticizes the artwork by six-year-old Christine, displayed in Brennan’s office, and then asserts that the grade was changed from a minus to a plus. It turns out the grade was altered – but by the teacher, who’d had to change pens when the first one ran out of ink. Brennan and Booth are both relieved, first that their little girl is the genius they think she is, and second, that she didn’t alter her report card. There is some genuine humor here, based on the sizable egos of both Brennan and Wells. Klugman is a welcome guest star who hits exactly the right notes as his character gets on Brennan’s nerves.

“The Fight in the Fixer” works, but the procedural aspect doesn’t have a lot of spark and most of the character aspects seem to be setting up scenes to come later.