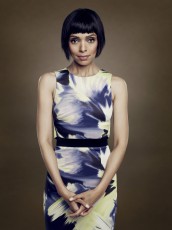 BONES: Tamara Taylor on the second half of Season 11 – Exclusive Interview

The actress talks the back half of Season 11 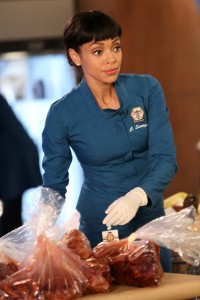 Tamara Taylor is now in her tenth year of playing Dr. Camille Saroyan on BONES. The romantic comedy/drama procedural on Fox Network, currently Thursdays at 8 PM, is in its eleventh season; one year after BONES debuted, Taylor joined the cast as the head of the forensics lab at Washington, D.C.’s prestigious (albeit fictional) Jeffersonian Institute.

This has been a challenging year for Taylor’s Cam, with multiple plot arcs. For one thing, there’s a new serial killer on the loose. For another, the lab’s entomologist, and Cam’s friend, Dr. Jack Hodgins (TJ Thyne), has lost the use of his legs in an explosion and has become extremely bitter, even verbally abusive. Then there’s the matter of Cam’s love life, with former fiancé Dr. Arastoo Viziri (Pej Vahdat) circling back into view while Cam is dating dashing photographer Sebastian Kohl (Gil Darnell).

BONES has been renewed for a twelfth and final season that will begin airing in early 2017.

ASSIGNMENT X: Let’s talk about the back half of Season 11.

TAMARA TAYLOR: Oh, my God. Major developments. Hodgins is very unfortunately paralyzed. That’s a new kind of scary crazy one. So we’re witnessing him go through his journey. He’s trying to navigate psychologically what it means. It’s interesting watching [him] find his way. Everybody is doing their best, and it still doesn’t seem to be quite enough for him.

AX: And why was Arastoo written off for awile? Did they want to give Cam more romantic options, or did Pej Vahdat get another job, or …?

TAYLOR: Well, he was written off for a very, very practical reason. My beloved Pej had to do a play. So they were like, “Okay, what do we do?  [laughs] I guess we give her a new love interest for a few months.”

TAYLOR: Yeah. We like Pej. Also Gil Darnell [as Sebastian] was wonderful to work with. He was awesome. But yeah, he’s not the forever guy.

AX: You also got to work with Shohreh Agdashloo, who has recurred as Arastoo’s mother/Cam’s potential mother-in-law. How was that?

TAYLOR: She is so unbelievably brilliant. And it was nice to witness Pej [get to work with Agdashloo], because both she and her husband, who worked on different episodes actually, are a huge couple in the Persian community.

TAYLOR: Houshang Touzie. He was in the Iran episode where I went to Iran to get Arastoo. And he played the bad guy. He’s such a lovely human being, and they have been married forever and a day, and do plays together, and it was just so wonderful to see Pej’s eyes light up, because he knew exactly who they were.

AX: That episode, “The Murder in the Middle East,” was a big Cam episode. David Boreanaz as Booth and Emily Deschanel as Brennan are both heavily involved, of course, but it’s really about Cam putting her freedom and even her life in danger to rescue Arastoo. How was that to do?

TAYLOR: It’s always wonderful when they give me something outside the lab to play with. It’s always fun. It was tough, it was interesting.

AX: And where did you actually shoot the scenes that were supposed to be in Tehran? I’m guessing not actually Iran …

AX: Late last year, David Boreanaz, Emily Deschanel and executive producer/BONES source material creator Kathy Reichs were involved in a joint lawsuit against Fox and executive producer Barry Josephson was involved in a separate suit against Fox, both about profits. It doesn’t appear to have affected anybody coming back to work. So none of that affected the mood on the set?

TAYLOR: Not at all, not at all. It’s one of those things that kind of separates the church and state. We come to work and do our thing and what’s going down is going down. It’s their business and it’s not really discussed.

AX: And do you have any other projects going on?

TAYLOR: You know what? Right now, this show is keeping me insanely busy this season. For some crazy reason, we are all working a whole lot more than we have. So I haven’t had time, but we’ll see.

AX: And what would you most like people to know about the back half of BONES Season 11?

TAYLOR: We are having so much fun this season. Hopefully, the audience will have as much fun watching it as we’ve had doing it.

This interview was conducted at Fox Network’s party for the Television Critics Association in Pasadena, California.