Bones The Death in the Defense review 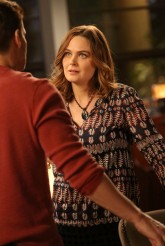 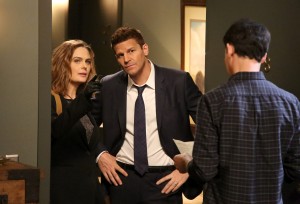 While the “A” story in the BONES Season 11 episode “The Death in the Defense” is nominally the investigation of the murder of a public defender, the main focus is on Hodgins (TJ Thyne) as he and everyone around him try to deal with his new disability.

In the midseason finale, Hodgins suffered a delayed but severe reaction to being caught in a bomb blast. Ultimately, he was paralyzed from the waist down. Released from eight weeks at a physical therapy clinic, Hodgins is raring to get back to work, even though his doctor advises against it and he’s in a wheelchair. Hodgins finds himself coming up against opposition from loving wife Angela (Michaela Conlin), who’s afraid that work stress could cause further complications, and boss Cam (Tamara Taylor), whose motives are more complicated.

As Cam finally confesses, she is so guilt-stricken that she let Hodgins come back to work right after the blast, something that may have worsened his condition, that now she’s terrified that he may deteriorate further. Hodgins argues passionately that this is his choice, and that if he’s deprived from the joy he derives from teasing out minute clues at the lab, he is no longer entirely the man that Angela loves. He needs his work and the lab needs him, so finally Angela and Cam, despite their misgivings, agree that Hodgins should be back with the Jeffersonian team.

Brennan (Emily Deschanel) and Booth (David Boreanaz) work on the case while armchair-quarterbacking Hodgins’ straits. Booth is in favor of hope in the face of dim prospects for recovery – after all, there were considerable odds against Booth and Brennan winding up happily married to one another with three children – while Brennan feels that science dictates Hodgins won’t walk again.

Another voice here is lab tech Wendell Bray (Michael Grant Terry), whose own cancer remission has proved to him that it’s always worthwhile to fight. Meanwhile, Booth’s FBI partner Aubrey (John Boyd) agonizes over whether he should have dealt differently with the moments leading up to the catastrophic explosion (Hodgins is the first to reassure Aubrey that none of this is his fault).

The culprit in the murder turns out to be the victim’s boss, who had a bad reaction and accidentally killed the woman when she rejected his advances. The forensic science here seems to be a little beside the point – given that they find the victim’s blood on the killer’s balcony railing and on a dumpster below, it seems like a thorough search would have turned up the relevant evidence anyway.

However, the thrust of “The Death in the Defense” is much more about how the characters react to a matter that has no easy or swift resolution. Here BONES is uncommonly graceful, especially in a climactic moment when Hodgins, told by the doctor that his condition is permanent, lies to Angela and tells her he’s getting better. This has a sense of depth and complexity that gives real weight to the proceedings.