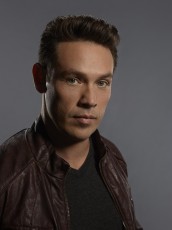 LUCIFER: Kevin Alejandro chats about his rivalry with the devil – exclusive interview

Kevin Alejandro has onscreen experience with playing a cop and with the supernatural, both of which serve him in good stead in Fox Network’s LUCIFER. LUCIFER, which has its first-season finale Monday April 25 and has been renewed for a second year, stars Tom Ellis in the title role, who really is the Devil. However, it turns out that Lucifer is not so much evil as curious. He’s left Hell and taken up residence in Los Angeles, where he decides to help LAPD detective Chloe  Decker (Lauren German) solve cases, much to her annoyance. Chloe’s displeasure, though, is nothing compared to that of Alejandro’s character, Chloe’s fellow detective and ex-husband Dan Espinoza, who doesn’t like this apparent lunatic honing in on his job and family, which includes little daughter Trixie, played by Scarlett Estevez.

Texas native Alejandro has played other officers as series regulars in GOLDEN BOY (NYPD) and the acclaimed SOUTHLAND (LAPD). He was also on the American version of the back-from-the-grave drama THE RETURNED and had arcs on TRUE BLOOD and ARROW.

AX: In LUCIFER, you’re playing another Los Angeles cop. Did you think, “Hmm, I’m doing a lot of this,” or were you like, “Oh, this is fun”?

KEVIN ALEJANDRO: You know what, if it ain’t broke, don’t fix it. I was really excited about it. I have the same answer as these guys. When I read the scripts, I saw the different kinds of things the guy gets to go through, so I was very excited to take this on. He’s so different from all the rest. He gets to go through a real emotional challenge, and he gets to be funny at times, so I loved it.

AX: Do you think there’s something about you that causes you to be cast so often as a police officer?

ALEJANDRO: Honestly, throughout the years, I’ve developed these skills that I think ring true. I think I’d be a good cop in real life. So I think that’s kind of why.

AX: Can you contrast the approach to police work in LUCIFER and in SOUTHLAND?

ALEJANDRO: Yeah [laughs]. SOUTHLAND – we had a great time, but it was much more serious. We really had to learn to do a lot to do a lot of these things. And here we have a lot more fun.

AX: Are you bringing any of the stuff you learned how to do on SOUTHLAND to bear in LUCIFER?

ALEJANDRO: Absolutely. The last thing I want to do is offend a police officer, let them think, “That guy doesn’t know what he’s doing.” So yeah, I’m very fortunate to have picked up all those tricks along the way.

AX: Have you had to learn anything for this show?

AX: How is it playing the ex-husband of another detective?

ALEJANDRO: How is it? It’s frustrating, because she has a big, tall, strapping guy who’s competing with me.

AX: Is your character Dan trying to win Chloe back, or just maintain a good custodial relationship regarding their daughter Trixie?

ALEJANDRO: Oh, absolutely. He realizes what he lost – a beautiful woman, a great child. Now he wants to win them back, and there’s this guy in his way, claiming to be Lucifer, the Devil.

AX: Do you as Dan think Lucifer is crazy?

ALEJANDRO: Yes, I do. Not so much crazy as I just think he’s a big child.

AX: Is it sort of funny, going from TRUE BLOOD, where everybody just went, “Yeah, there are supernatural beings running around, whatever,” to LUCIFER, where everybody’s going “No!”?

ALEJANDRO: It’s a great difference, and I love it. Because they’re two different worlds. And I get to be the straight one, who would naturally, if someone came up to you and said, “Hey, I’m the Devil,” you’d be like [sarcastic and disbelieving], “Okay, you’re the Devil.” I get to go with it.

AX: How do you like playing opposite young actress Scarlett Estevez as Dan and Chloe’s daughter?

ALEJANDRO: She is amazing. She’s so funny, best little girl ever. So cute.

AX: LUCIFER is based on the comics by Mike Dringenberg and Sam Kieth, which are in turn derived from the character originally created by Neil Gaiman in his SANDMAN graphic novels. Were you familiar with these before you got involved with the show?

ALEJANDRO: I don’t have an extensive history with comic books, actually. My son is getting into them now, though. He’s loving this whole genre world. So that’s one of the things he asked me for for Christmas, was a bunch of comics. I have not gotten him LUCIFER. I’m not sure if it’s going to be suitable for a seven-year-old.

AX: Also, your character isn’t really in the comics …?

ALEJANDRO: No, I don’t think so, either. I think this is a new take on it. It kind of loosely follows some of the events throughout the comic, but it’s definitely its own original sort of [way] – it veers off in a more realistic way.

ALEJANDRO: But I am producing a movie that’s in the works, so I’m looking forward to the time off of this to put my energy into that. It’s a road trip movie about a bunch of boys from Texas I want to shoot in my hometown [San Antonio], but we’re in early process of it, early stages. I’m looking forward to the time I spend on that and making it from a dream into a reality.

AX: Will you be in that as well?

ALEJANDRO: I’ll be the lead in it.

ALEJANDRO: I just hope people watch it and give it a chance to breathe and give it the opportunity that it deserves, so that you can like it as much as we like doing it.