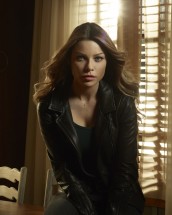 LUCIFER: Lauren German on working with the Devil – exclusive interview 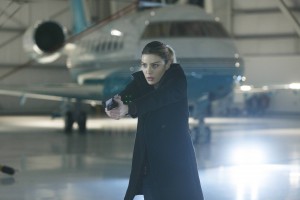 California native Lauren German has played a number of characters who can take care of themselves and the people around them. She was hardworking paramedic Leslie Shay, still mourned by her peers, on several seasons of CHICAGO FIRE, and before that, she got the best of the sadists in the feature HOSTEL: PART II as “final girl” Beth.

Now German is playing LAPD detective Chloe Decker on Fox Network’s LUCIFER, which has just been picked up for a second season; the first-season finale airs Monday, April 25 at 9 PM. Detective Decker has a lot to deal with – she’s a single divorced mother to young daughter Trixie (Scarlett Estevez), while her ex, fellow police detective Dan, played by Kevin Alejandro, is both competitive at work and wants her back. But Decker’s biggest problem may be a tag-along she’s picked up, club owner Lucifer Morningstar, played by Tom Ellis, a very observant nutcase who thinks he’s actually the Devil. Of course, the audience and Lucifer know what Chloe doesn’t, which is that he really is the Devil, which in turn explains how he knows so much and how he can survive seemingly fatal injuries.

AX: You’ve played some very tough cookies in your time, between HOSTEL II and CHICAGO FIRE, so where on your personal toughness scale does LUCIFER’s Chloe stand?

LAUREN GERMAN: I’d say pretty far to the right, if the right is tough, and the left isn’t. I really respect the character. She’s a single mother, and she’s a detective, and she’s kind of self-deprecating and not cool at all [laughs]. She’s kind of a nerd, like me, and so I like her. I can vouch for her.

AX: Did you leave CHICAGO FIRE for LUCIFER, or did you tell the CHICAGO producers that you wanted to leave, or did they feel the other CHICAGO characters needed the tragedy of Shay’s death to motivate them?

GERMAN: I think that they saw an ending for my character and then I took a break.

AX: After all of the CHICAGO work, was there anything left that you had to learn for LUCIFER, or do you pretty much know how to pull a gun …?

GERMAN: Oh, there was a ton to learn. On CHICAGO FIRE, I trained with firemen and paramedics, but on this, I went with detectives and I trained a bunch. So it’s very different. I mean, it’s first-responder stuff, but it’s very specific.

AX: What is Chloe’s attitude towards Lucifer? Is it, “He’s kind of useful,” or “Wow, stop impeding my job”?

GERMAN: I’m sort of the only one not in the loop [that Lucifer is for real], so to speak. I’m still very much like, “I’m hanging out with a crazy person who thinks he’s the Devil.” And he’s very smart.

AX: If Chloe thinks Lucifer is crazy, is she wondering if his craziness is rubbing off on her?

GERMAN: Not in the show yet, no. I’m just very much in my own person, going, “This guy is weird.”

GERMAN: It’s great. It’s beautiful. I have more respect for moms than almost anything. What’s cool is, I have such respect for first responders and single mothers, and I’m kind of both. So it’s great.

AX: How do you enjoy working with Tom Ellis?

GERMAN: Oh, he’s the best. I’ve been so lucky in my life with costars. [CHICAGO FIRE costars] Taylor [Kenney] and Jesse [Spencer] are still my very close friends, Monica [Raymund] is my best girlfriend, but Tom is the most lovely person. He’s so kind and giving. I love him.

[At this moment, Kevin Alejandro walks up.]

AX: And how is it working with Kevin Alejandro?

GERMAN: [laughing with Alejandro standing right next to her] He’s the worst, I hate him. Yeah, Kevin’s the best. He’s good, too. We don’t have a bad egg on our show.

AX: What are Chloe’s ambitions for herself?

[Tom Ellis arrives on the scene.]

AX: What would you most like people to know about the show?

TOM ELLIS: That none of us are sleeping with each other.

This interview was conducted during Fox Network’s party for the most recent Television Critics Association press tour in Pasadena, California.